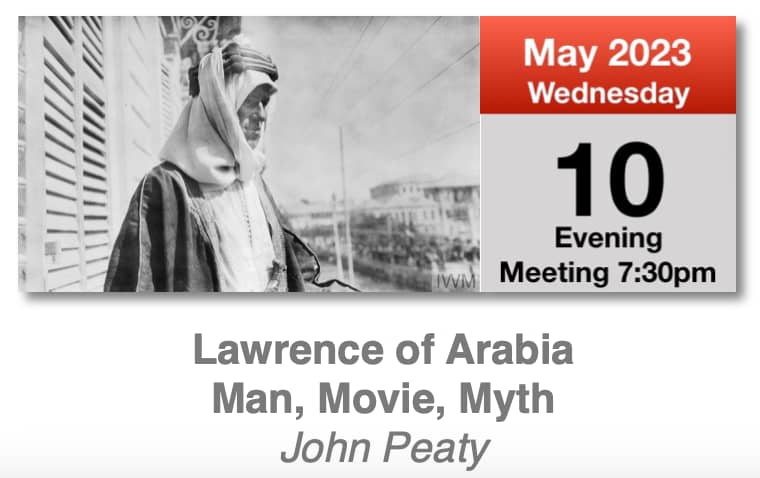 Lawrence was probably the most remarkable officer to have served in the British Army during the Great War. Today he is probably the most famous. Yet it is now difficult to separate the man from the myth. What most people know about Lawrence and the Arab Revolt is derived from an epic movie, which is great cinema but poor history.
A British officer, Thomas Edward Lawrence was one of the leaders of the Arab revolt against the Turks during the First World War. The subject of many biographies, T.E. Lawrence is one of the very few military figures from the First World War familiar to the general public as a result of the celebrated 1962 film Lawrence of Arabia.
As a result of recent operations in Iraq and Afghanistan, T.E. Lawrence has enjoyed a resurgence of interest among British and American army officers.
In his presentation, Dr Peaty will try to disentangle the man from the myth, examine the various portrayals of Lawrence and try to explain how a junior British Army officer became, next to Mao, the most famous guerrilla leader the world has ever known.
“Lawrence was a remarkable man, with a remarkable life – it really didn’t need ‘sexing up’ by Hollywood…”

Lawrence of Arabia was the name given to a British Intelligence Officer, Thomas Edward Lawrence, who fought alongside Arab guerrilla forces in the Middle East during the First World War.

Lawrence joined the Army in 1914 and was commissioned as a second lieutenant in October, working in the geographical section of the War Office until he was posted to Cairo, Egypt in December 1914 as a liaison and map officer. He stayed in Cairo for almost two years. Two of his younger brothers were killed while serving in France in 1915. Their deaths affected him deeply and he felt guilty for staying in such a relatively safe, office-based position. However, the start of the Arab Revolt in June 1916 led Lawrence to undertake dangerous missions inside enemy territory in Arabia.

The Start of The Arab Revolt

Before the war, Britain had maintained a long-standing policy of support for the Ottoman Empire in the Middle East. However, this ended with Turkey’s support of Germany in November 1914. Looking to take advantage of the growing Arab nationalism in the area, certain British elements encouraged and supported leading Arabs to revolt against the Ottoman colonial rule. These complex negotiations were still underway when Grand Sherif Hussein, ruler of the Hejaz province (now part of Saudi Arabia), started an uprising with an expectation of British support. This uprising would become the Arab Revolt and it was led by and fought by Sherif Hussein’s four sons, Ali, Abdullah, Feisal and Zeid.

Feisal’s Arab forces separate actions against the Turks did prove very useful to Allenby’s forces. They attacked the Turkish lines of communication and sabotaged the railway that led to Palestine, a crucial Turkish supply route. They also cut telephone wires, forcing the Turks to send wireless messages which the British could intercept. By harassing and pinning down thousands of Turkish troops, they prevented them from concentrating against Allenby’s advance. Lawrence was involved in many of these activities and at the forefront of many vital victories. He was with the Arab troops that entered Damascus along with Allenby’s forces on 1 October 1918.

The Fall of Damascus

Lawrence claimed the fall of Damascus as a victory for Feisal and left the Middle East shortly afterwards. As soon as he returned to London he began to work for Arab independence. After the Armistice in November 1918, it was agreed that Feisal and Lawrence should represent the Arabs at the upcoming peace conferences in Paris. However, British and French leaders had already agreed privately on the future of Turkey’s Arab territories in the 1916 Sykes-Picot agreement. The Middle East was to be divided into British and French spheres, leaving no place for independent Arab states.

Lawrence after the war

He worked as an advisor to Winston Churchill, then Colonial Secretary, in 1921 and joined the Royal Air Force (RAF) under a pseudonym in August 1922. He was soon identified and asked to leave. He then went on to join the Tank Corps, again under an assumed name, before re-joining the RAF in 1925. He also wrote a book about his experiences in the Middle East, Seven Pillars of Wisdom.

Lawrence retired from the RAF in 1935. Soon afterwards he was involved in a motorcycle accident near his home, Clouds Hill in Dorset. He suffered severe head injuries and died in hospital on 19 May 1935, aged 46.

John Peaty is a Fellow of the Royal Geographical Society and of the Royal Historical Society. He holds a PhD and MA in War Studies from King’s College London. He has long served on the Committee of the British Commission for Military History, where he was International Secretary for many years.  He is the Chair of the Templer Medal book prize and Council member of the Society for Army Historical Research, the Convenor of the Historical Military Mapping Group and Council member of the British Cartographic Society, a Founder Member of the Royal Air Force Historical Society and a Life Member of the Institute of Historical Research. He has lectured widely to both specialist and non-specialist audiences, both in the UK and overseas. He has published articles, chapters and essays. He is currently writing a new study of Waterloo for Routledge. He has long worked for the Ministry of Defence: at the Army Historical Branch, then the Defence Evaluation & Research Agency and currently the Defence Geographic Centre. He was closely involved with OP REFLECT (the British Army’s commemoration of the centenary of the First World War), including contributing to the 2-volume Army Battlefield Guide. He is an inveterate battlefield tourer. He has guided both military and civilian groups around battlefields across the globe.