This Autumn marks the 80th Anniversary of the start of the Second World War and on the 14th October 2019 there will be services at the War Memorial in Wantage and at the Royal Oak Public House (Headquarters of the Wantage branch of the Royal Naval Association) to commemorate this fact. See end of article for further details.

The first casualty from WW2, commemorated on Wantage War Memorial

The first casualty from WW2, commemorated on Wantage War Memorial was Marine Verdun Loos James Pierpoint who sadly died on the 14th October 1939. He was one of 835 men who died when the battleship HMS Royal Oak was torpedoed by the German submarine U-47 at Scarpa Flow in the Orkney Islands.

Verdun as one can see was named after two of the most famous battles of WW1. Born on the 31st October 1916, he was the son of William and Annie Pierpoint (nee’ Blunsden). Father William (who  served with the 14th Battalion Worcestershire Regiment from 1916-18) was a bricklayer working for Wheeler & Co in Mill Street. Verdun had 11 siblings. Of his brothers four served in WW2, George (with the Military Police), Bill (Royal Artillery), Frank and Desmond (both with the Royal Berkshire Regiment).  After leaving school, Verdun worked as an errand boy for Nichols & Son stationers and printers in the Market Place where also his brother Desmond worked as a printer. He was also a keen cricketer , playing for the Wesleyan School team.
According to a family story,  in 1933, Verdun stole some money from his employer,  and  his father William found out,  and gave him so much hassle over what he had done, Verdun left home to join up.

Verdun enlists into the Royal Marines

Overseas to Suez and posted to HMS Nelson

Verdun’s first overseas posting was to Egypt for a year where the British retained control over the Suez Canal and the Royal Marines helped to provide security for this ensuring passage for ships to India, the Far East and Australia.
On return from Egypt, Marine Pierpoint was posted to HMS Nelson on 11th April 1937. HMS Nelson was one of two Nelson class battleships built between the two World War (the other being HMS Rodney). They were unique in being the only ships carrying a main amament of nine 16” guns, all of which were carried forward of the superstructure. It was the role of the Royal Marines on board to man these guns. 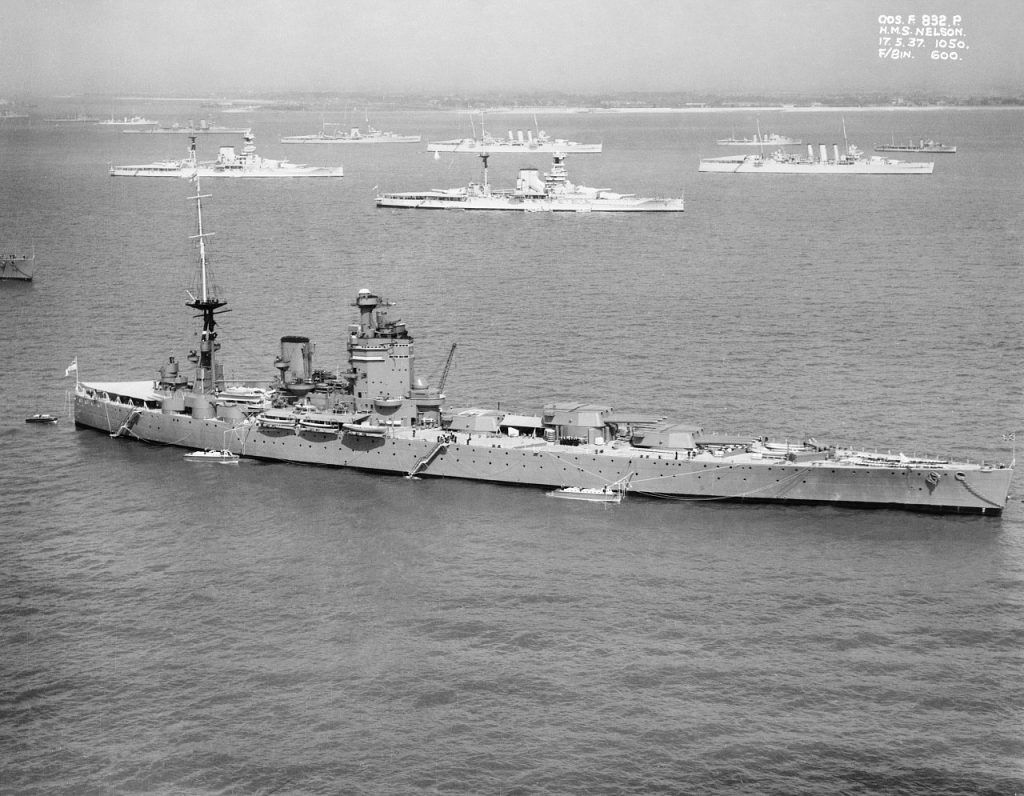 HMS Nelson was the flagship of the Home Fleet and on the 20th May 1937, took part in the Coronation Fleet Review at Spithead off the coast at Portsmouth. Ten British battleships and battlecruisers were present as were for the first time four aircraft carriers. In all there were 101 surface warships taking part along with 22 submarines and 11 auxillary ships drawn from all the Royal Naval Fleets. Foreign, Empire and Commonwealth navies were also represented. Following the review in which the King and Queen on the Royal Yacht Victoria and Albert, passed along the lines of moored ships there was a flypast by the Fleet Air Arm. That night the assembled ships were illuminated by their own searchlights. The spectacle was famously described on BBC Radio from HMS Nelson by Lt-Commander Thomas Woodroofe who obviously had enjoyed too much Royal Naval hospitality.

Film of the 1937 Spithead Review

Film of the review can be seen here including a short excerpt of the King and the Royal Marines Guard of Honour, on HMS Nelson.

Lt-Commander Woodroofe enjoys rather too much Royal Naval hospitality.

Verdun adopts James as his surname instead of Pierpoint.

It was whilst serving aboard HMS Nelson in July 1938, that Verdun decided to adopt James as his surname instead of Pierpoint. The reason for this is not clear at the present time, but this is the surname by which he is known in records from this date onwards. After leaving HMS Nelson , in April 1939,  Verdun James was based at Portsmouth and he was here in June 1939 to join HMS Royal Oak when it  arrived in port. Here new members of the crew were issued with tropical clothing in the belief that the ship was going to the Mediterranean. However with war seeming to be inevitable this was cancelled and HMS Royal Oak headed north instead.

HMS Royal Oak was the last and largest battleship to be built at Devonport, launched in 1914 and completed in 1916. She was armed with eight 15 inch guns contained in four turrets , plus an assemblage of 6 inch guns, anti-aircraft guns and four torpedo tubes. Heavily armoured with 13 “ steel armour extending 5ft below the waterline, the Royal Oak was a very powerful ship and needed a crew of over 1000 to maintain her. During World War 1 HMS Royal Oak took part in the Battle of Jutland.

Sighting of the German Battlecruiser Gneisenau

By the start of WW2, the Royal Oak was over 20 years old, slow and outdated, but still needed by the Royal Navy. She was at anchor at Scarpa Flow in the Orkneys, attached to the Home Fleet,  when war was declared on the 3rd September 1939.
On the 9th September 1939, the CinC Home Fleet received information from the RAF when a Hudson from 224 Squadron of Coastal Command signalled that it had sighted the German Battlecruiser Gneisenau, cruiser Koln and 9 destroyers steaming north off the coast of Norway.
That evening, HMS Royal Oak along with the destroyers Matabele and Sturdy set sail to patrol to the west of the Shetlands. Due to her slow speed HMS Royal Oak did not sail with the rest of the fleet. She had been given the task to act as a ‘backstop’ should Gneisneau elude the rest of the fleet and attempt to break out into the Atlantic.

HMS Royal Oak found herself running into very heavy seas and also due to the bad weather she lost touch with her destroyers. As a result the ship returned to Scarpa Flow, and anchored  in the northeastern corner of the Flow, some 1500 yards south of the seaplane carrier Pegasus.
In the belief of an attack by the Luftwaffe on Scarpa Flow was imminent, the majority of the Home Fleet left Scarpa Flow over the next few days, leaving Royal Oak as her anti-aircraft armament was deemed useful in protecting the important radar station at Netherbutton near Kirkwall.  Also, HMS Royal Oak had suffered some structural damage, which needed repair, and many of her carley rafts had been swept away.

Kapitanleutnant Gunther Prien and U-boat U-47

Whilst this was going on, some miles to the east of the Orkneys, the German submarine U-47   was lying on the bottom of the North Sea. Within days of the outbreak of the war, Kommodore Karl Donitz, Commodore of the Unterseeboote arm of the Kriegsmarine had decided that , given the right man, a U-boat could attack the British Fleet base and sink some of her capital ships. That man, Kapitanleutnant Gunther Prien and his U-boat U-47 was waiting for the opportune moment to attack. 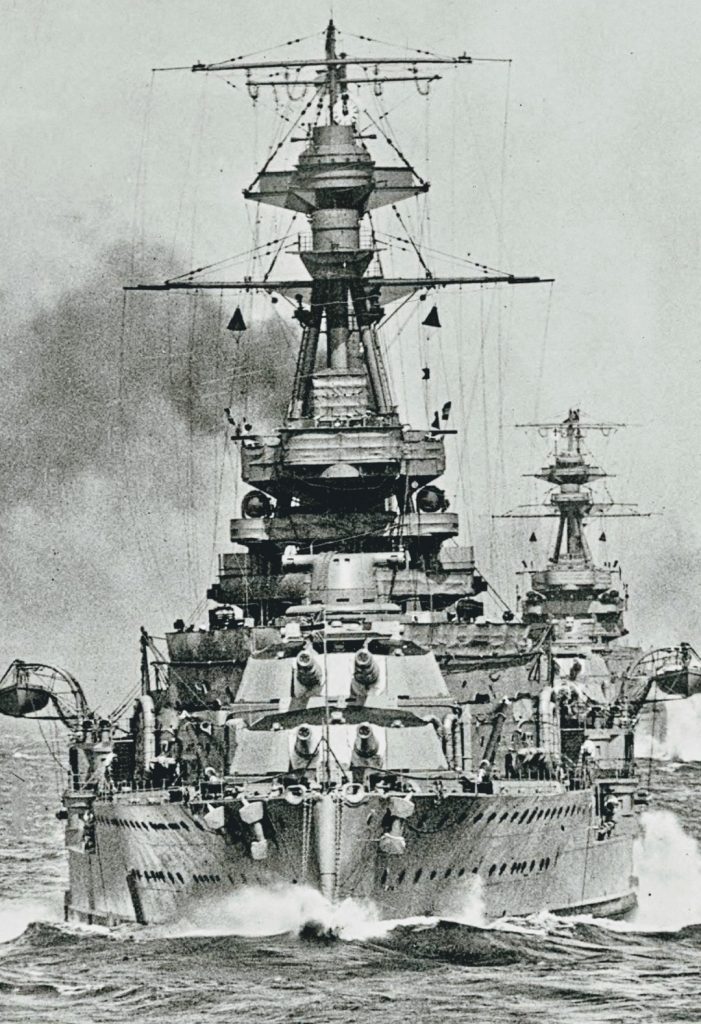 U-47 penetrates the line of block ships at Kirk Sound

On the night of 13th/14th October 1939, U-47 penetrated the line of block ships at Kirk Sound and a lookout spotted the outline of a battleship. As it was 1 o’Clock in the morning, the vast majority of the crew were asleep.  The U-47 fired a salvo of three torpedoes. Two missed, but the third struck the bow of the ship at 01:04 shaking the ship and waking the crew. Many of the men on board heard a muffled ‘whump’  and were unsure of what caused it. It was suspected there had been an explosion in the ship’s  forward inflammable store. An announcement was made over the ship’s tannoy for this to be checked, but many sailors returned to their hammocks unaware that their ship was under attack.

The U-47 attempted another shot via its stern tube, but this too missed. Reloading the submarine tried again with a spread of three further torpedoes, and this time there was a large explosion underneath the Royal Oak and she rolled over and sank within minutes. By 1:30am all there was to be seen was fuel oil and survivors in the water desperately trying to survive.

Further explosions on board

On board the Royal Oak, the explosions blew a hole in the armoured deck destroying the stokers, boys and marines mess decks. The power had gone so any survivors had to struggle through the darkness to find a route out. Cordite from a magazine ignited and the ensuing fireball passed rapidly through the ship. 833 men died within the ship including over 100 boy seamen. Local casualties apart from Marine Verdun Pierpoint, included Able Seaman Joe Wilkins originally from Wantage, Cpl Henry Jordan Royal Marines whose parents lived in Lockinge and boy sailor Frederick Minns from Uffington.
There were 420 survivors, 386 of whom were pulled from the sea by the tender Daisy 2, the U-47 returned to Germany where it received a hero’s welcome and Hitler received the crew in Berlin.

In Wantage Oxfordshire on Monday 14th October 2019 there are going to be two services to commemorate Marine Verdun Pierpoint and those who lost their lives in HMS Royal Oak.
The first takes place at the War Memorial in the churchyard of St Peter & St Pauls Church in Wantage at 18:10 and the second at the Royal Oak Public House (the HQ for Wantage Royal Naval Association) at 20:00. It is hoped to have a small exhibition about HMS Royal Oak at the Vale and Downland Museum in Wantage on the day. 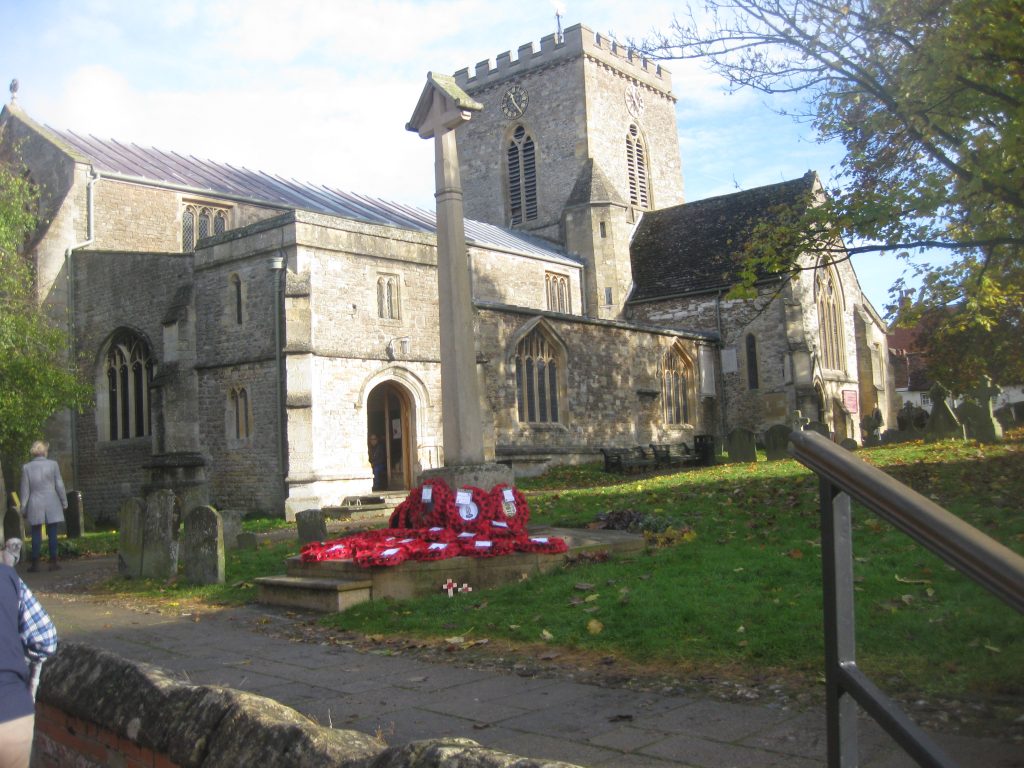 Thanks to Trevor Hancock of White Horse Ancestors for providing this article.

White Horse Ancestors is a Local, Family and Military History Research Service based in Wantage Oxfordshire.