An article by Nigel Parker and Jerry Cockeram

By the 20th May 1940 the Allied armies were fighting a desperate rear guard action to stem the German onslaught across Northern France and Belgium with Luxembourg having been occupied without a fight on 10th May during the opening moves of Operation Danzig and the Dutch Army having surrendered on the 13th May following the bombing of Rotterdam.

It was at this juncture, with the German armies attacking Arras and moving along the south through to the coast at Abbeville and Etaples, threatened to cut the British and French Armies in half that the RAF mustered its medium bomber forces to try and stem the flow of troops before the northern armies were encircled.

RAF Bomber Command into the fray

Ninety-two aircraft from Bomber Command were despatched on tactical night operations consisting of eighteen Blenheims from 2 Group which were for the first time attempting night operations following devastating losses during daylight ops at the hands of the German fighter forces, along with thirty-two Wellingtons of 3 Group, twenty-four Whitleys of 4 Group and eighteen Hampdens of 5 Group which had up until then been involved in the strategic bombing targets in Germany. A variety of targets were selected, mainly consisting of railways, road junctions and German troop concentrations around the Cambrai and Saint Quentin areas. The roads that the German troops were advancing along were to be avoided due to the presence of large numbers of French refugees who were aimlessly fleeing to nowhere but clogging the roads.

Five Whitley bombers based at Driffield, Yorkshire from 102 Squadron were detailed to attack bridges over the river Oise, at Ribemont, to the south-east of Saint-Quentin and to interfere and disorganise enemy troop movements. Each aircraft was loaded with 4x 500 lb and 6x 250 lb general purpose bombs and all had taken off by 20.30 hrs. When over the target area bombing took place from as low 1,000 feet, there being some light Flak being experienced with one aircraft returning with damage.

What exactly happened to Whitley V N1380 DY-R for Robert no record exists having targeted a bridge at Ribemont but it is assumed that it was hit by Flak near the target area and crashed near Hamégicourt carrying its five crew to their deaths. They were Flight Lieutenant David Owen (22), Pilot Officer Dennis Holbrook (20), Sgt Duncan Barrett, LAC Reginald Newberry (20) and AC2 Michael Dolan (19).

The war moved on quickly and over subsequent weeks the crash site was briefly investigated by German troops who recovered the bodies of the crew and buried them close to the wreckage and marked the graves as “Unknown English Airmen”. 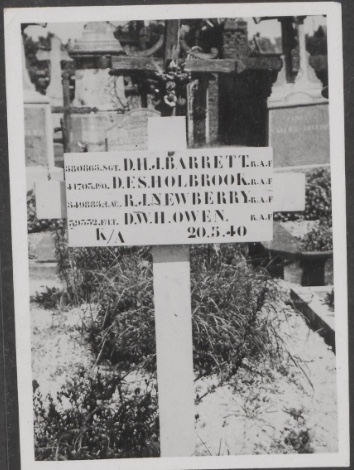 The site of the Crash

The aircraft had broken up on impact with the ground and wreckage was spread over a wide area at Priestow Farm, Senercy. In 1942 a Monsieur Dubois-Briehaut, a local resident took it upon himself to investigate the site and recover the bodies from their field graves. He was unable to find any form of identification on the bodies of the four airmen but on the fifth he found a gold ring with the inscription inside “Mrs G Dolan, 15 Drayton Street, Liverpool”. Monsieur Dubois-Briehaut then constructed some coffins and moved the bodies to Hamégicourt Church Cemetery, about two miles south from the crash site, where they rest to this day. Monsieur Dubois-Briehaut was subsequently able to pass the gold ring onto the investigating RAF Officers in 1945 and the ring was passed onto Michael Dolan’s sister, his mother having died a few months previously. 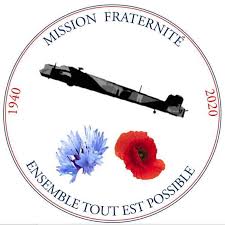 The French organisation Mission Fraternité 2020 are planning a large commemoration on 23 May 2020 to remember the events of eighty years previously and the act of five RAF airmen who gave their lives while trying to stem the advance of the invader across France. Their aim is to invite representatives of the families of all the airmen to attend the ceremony.

As a result of the Coronavirus the ceremony has been cancelled. Further details of revised dates will follow in due course.

Mission Fraternité has also discovered that two of the airmen’s ages were incorrectly recorded on the graves. The team will be in contact with CWGC to see if this can be rectified.

It appears that there was a Press Day at RAF Driffield in Yorkshire,  the home of 102 squadron, during March of 1940 which explains why we have a number of photographs of the downed aircraft “R” for Robert and the aircrew. Some of these photos including those of David Owen and Denis Holbrook appeared in the June 1940 edition of life magazine result. Sadly the aircrew had perished in France before the magazine was published. 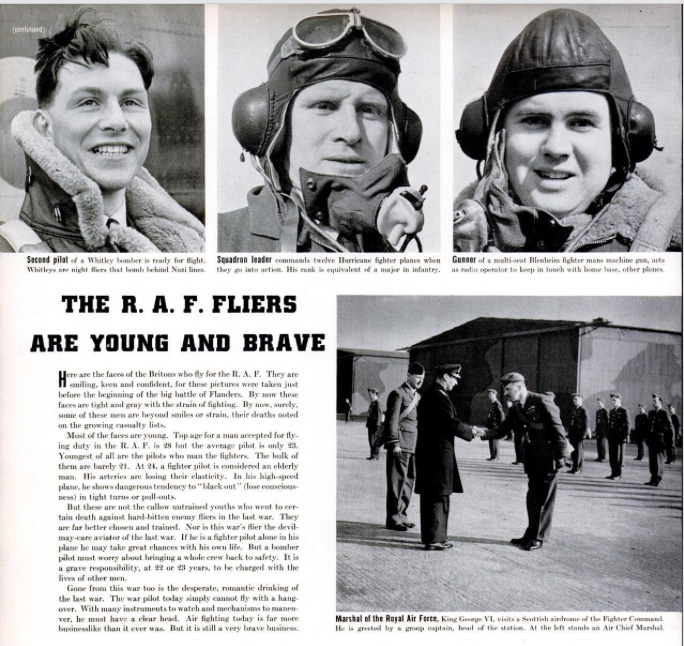 We would like to express our heartfelt gratitude to this  young French team for all their hard work, dedication and the considerable amount of effort  in helping to remember these brave RAF airmen who gave the ultimate sacrifice in 1940.

In addition we would like to thank Richard Ayres for his dogged perseverance in tracking down the relatives of P/O Dennis Holbrook. 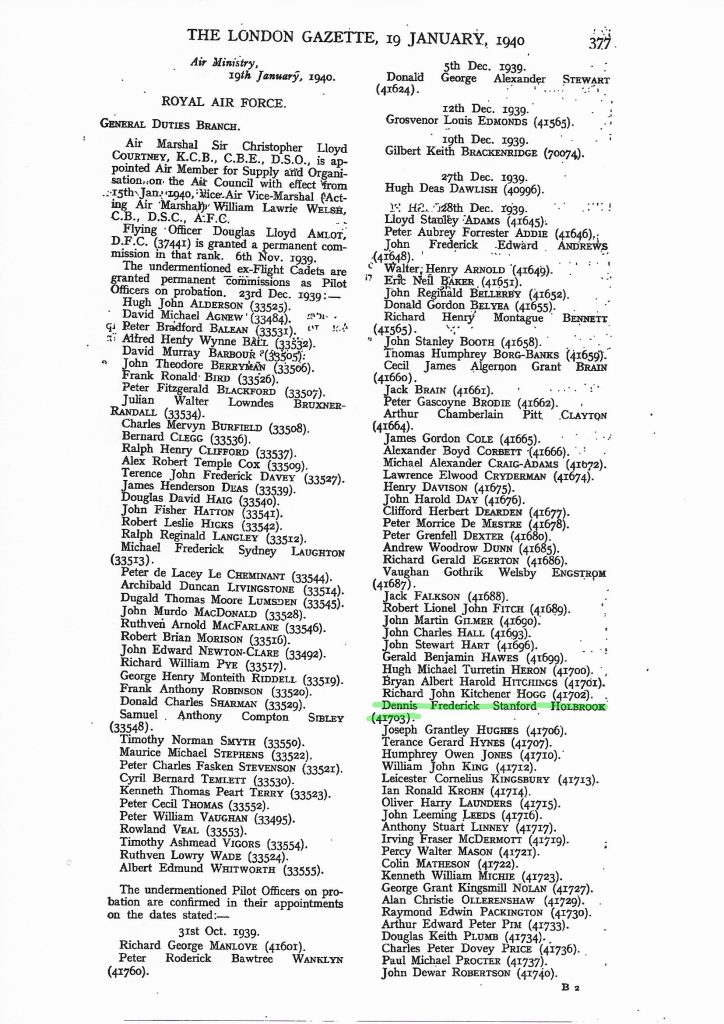 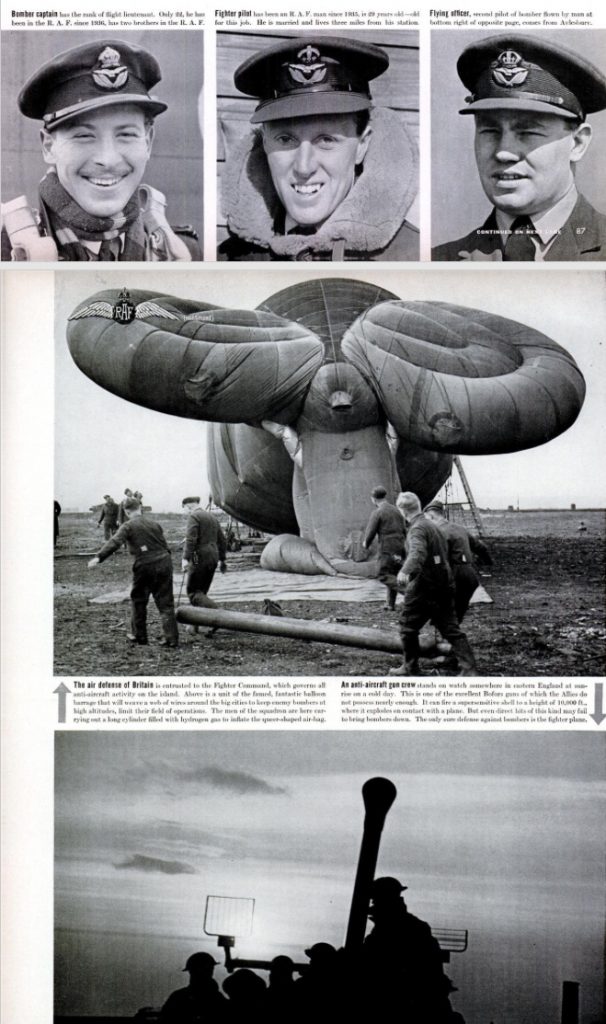 Nigel Parker has followed a career in Engineering and for 23 years ran the Cryogenics Department at Oxford University. Having a lifelong interest in military aviation and being involved in the research and recovery of many crashed military aircraft he chose to take early retirement and follow his passion; writing a twelve volume series on the German Air Force losses over Great Britain in World War 2; “Luftwaffe Crash Archive”, followed by a three volume series entitled “Gott Strafe England”; the German air assault against Great Britain 1914 – 1918. He is now writing a book on the V1 and V2 campaign and also a revised history of the Battle of Britain. Nigel is a co-founder of the British Modern Military History Society.

Jerry Cockeram has had a long career in IT across a range of industries including aerospace, supply chain, manufacturing and F1. Jerry has a passion for military history and is also a co-founder of the British Modern Military History Society.