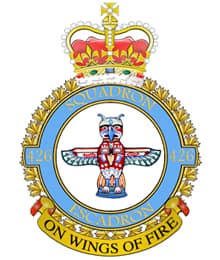 9th September 1944, Halifax NP681 flying from Linton-on-Ouse to support British troops besieging Le Havre, carrying 16x 500 lb bombs; the raid was aborted while over target due to cloud cover and 4 bombs were jettisoned into Channel. As they flew over Reading smoke and then flames were reported coming from the port outer engine , the pilot then ordered his crew to abandon the aircraft. Five crew baled out but the pilot and flight engineer were last seen fighting with the controls, when the port wing broke off, the aircraft rolled over and dived into the ground. F/O Johnny Wilding (USA) RCAF and Sgt John Andrew RAF killed.
Wallingford has named two roads after the crew and erected a cairn to their memory as it is claimed that the two airmen stayed with their bomb laden aircraft to steer it clear of the town.
On Monday 9th September 2019 a memorial service was held in Crowmarsh, close to where the aircraft crashed on the 75th anniversary of the event. The memorial service was attended by personnel from RAF Benson including Group Captain Adam Wardrope DFC  and the RAF Chaplain Matt Stevens together with representatives from the Royal British Legion and the local community.
Wing Commander (Ret) Jim Wright DFC, former navigator with the Bomber Command Pathfinder Force and veteran of 44 wartime operations laid a wreath on behalf of the citizens of Crowmarsh and the Bomber Command Association. 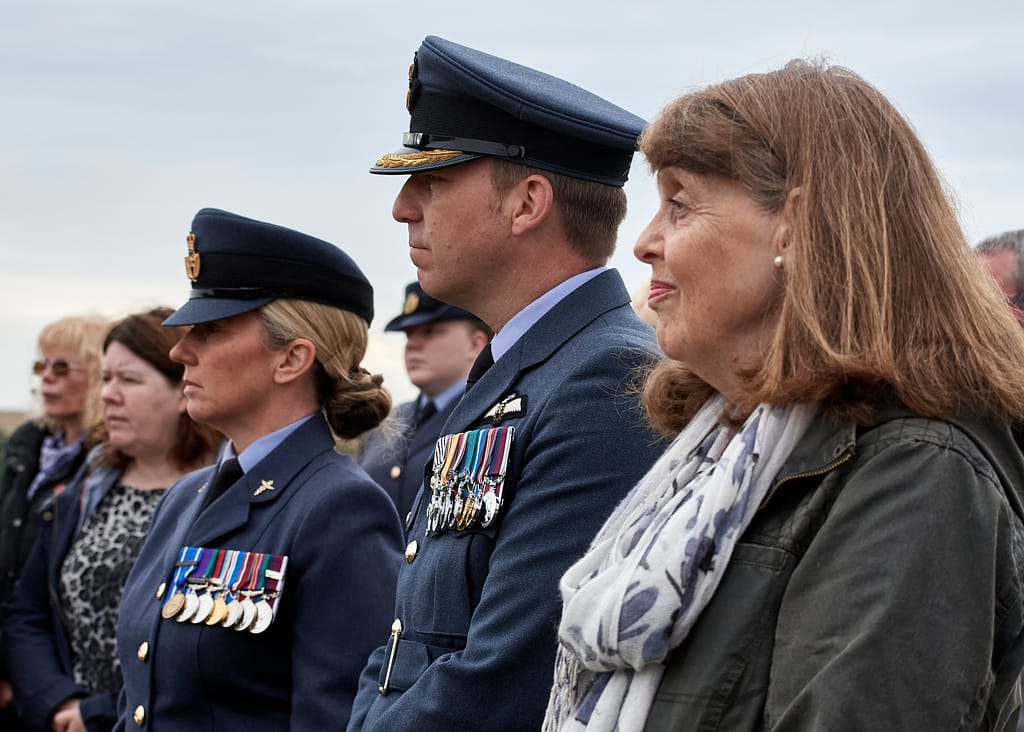 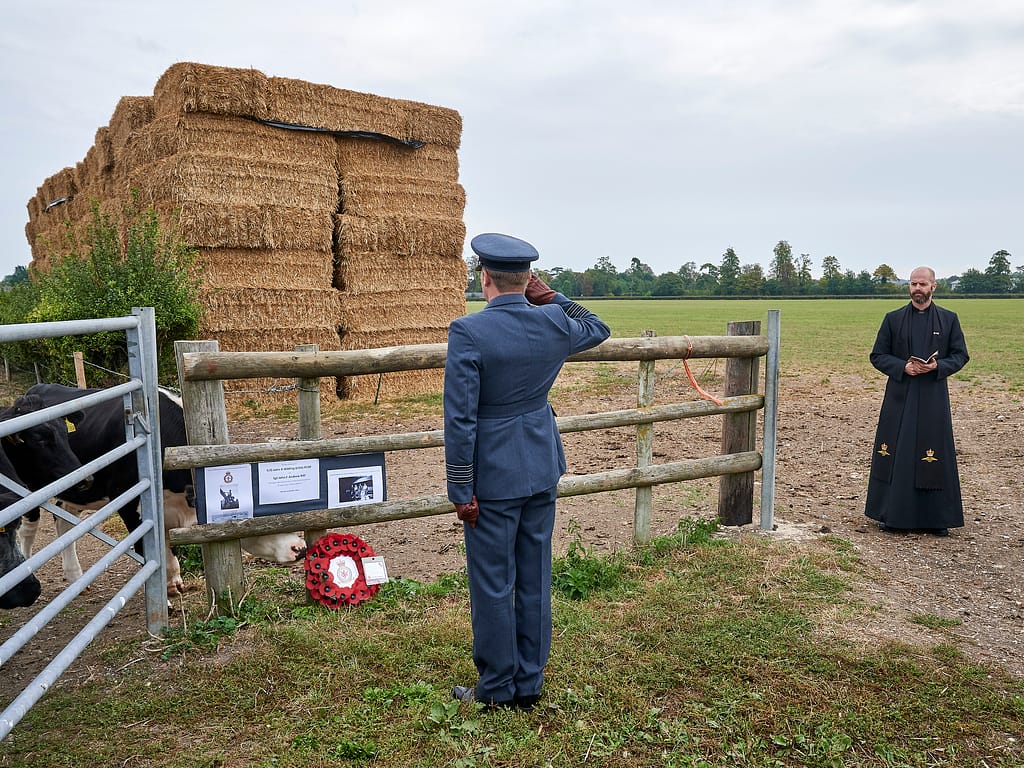 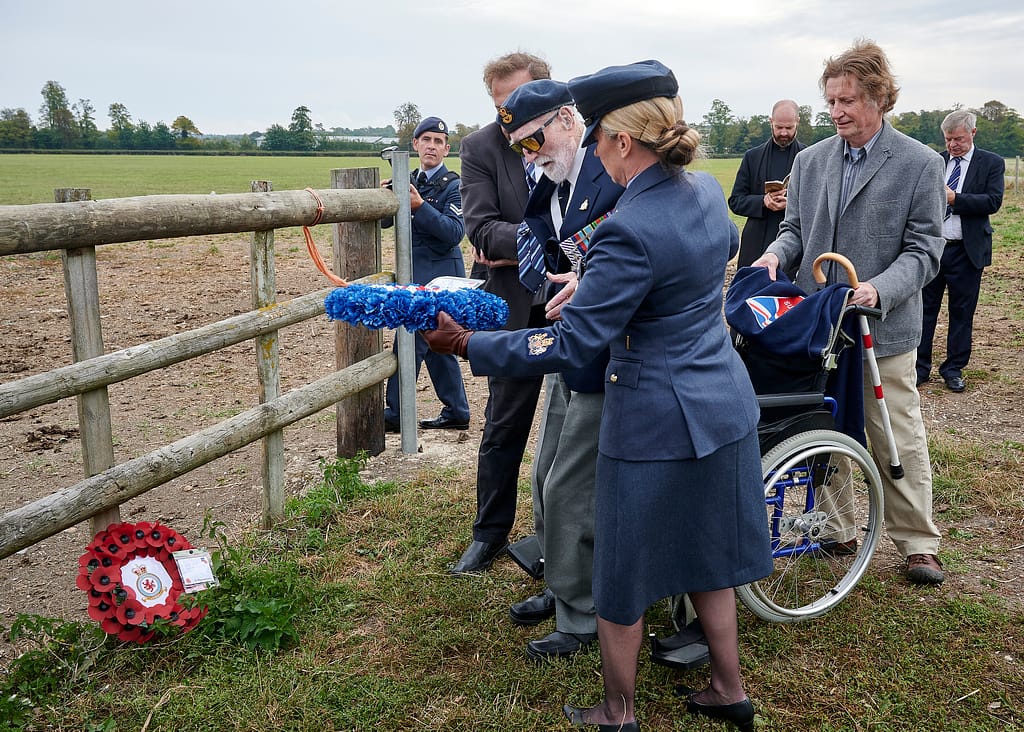 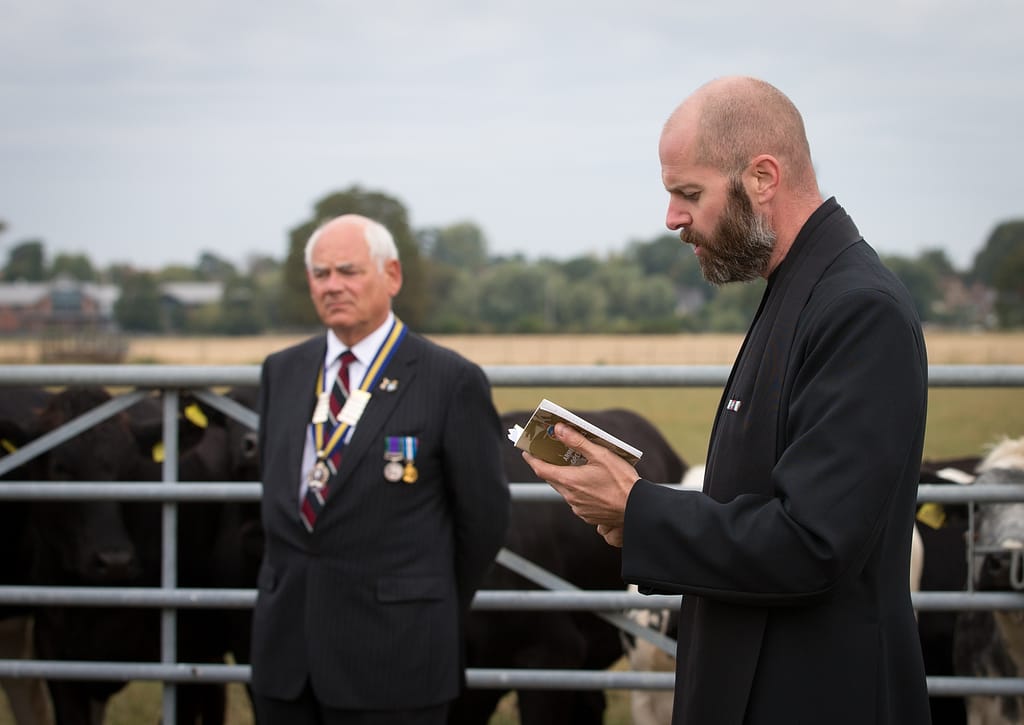 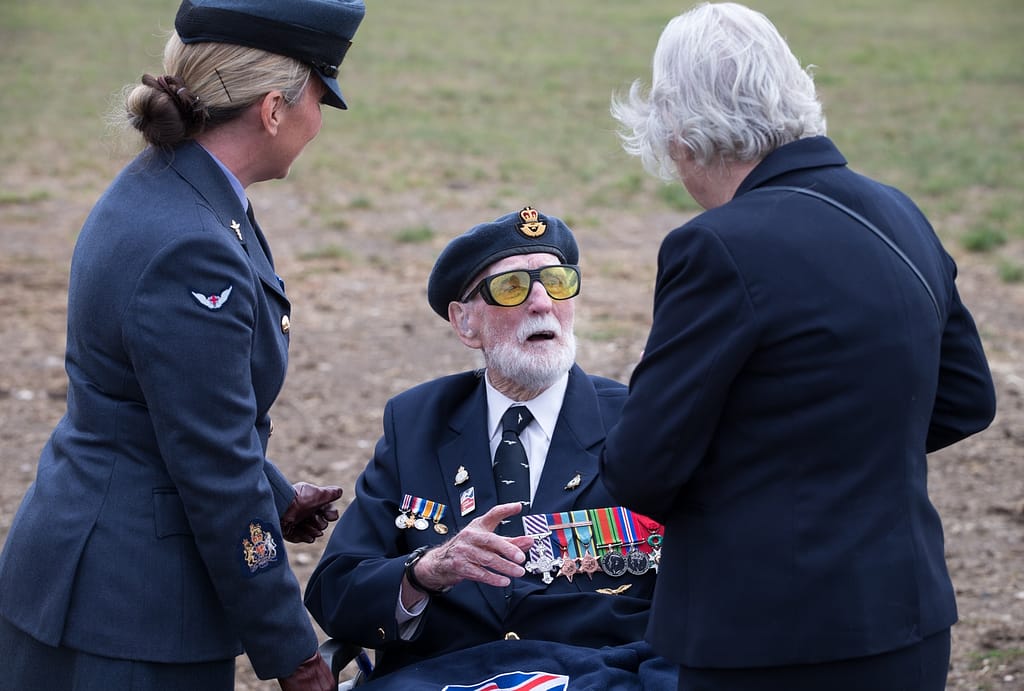 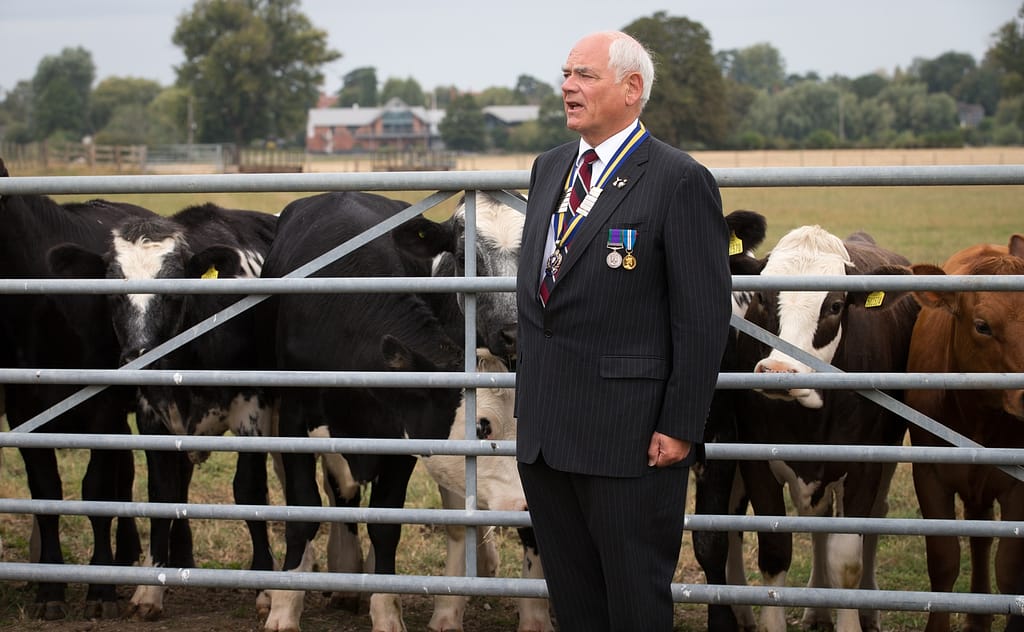 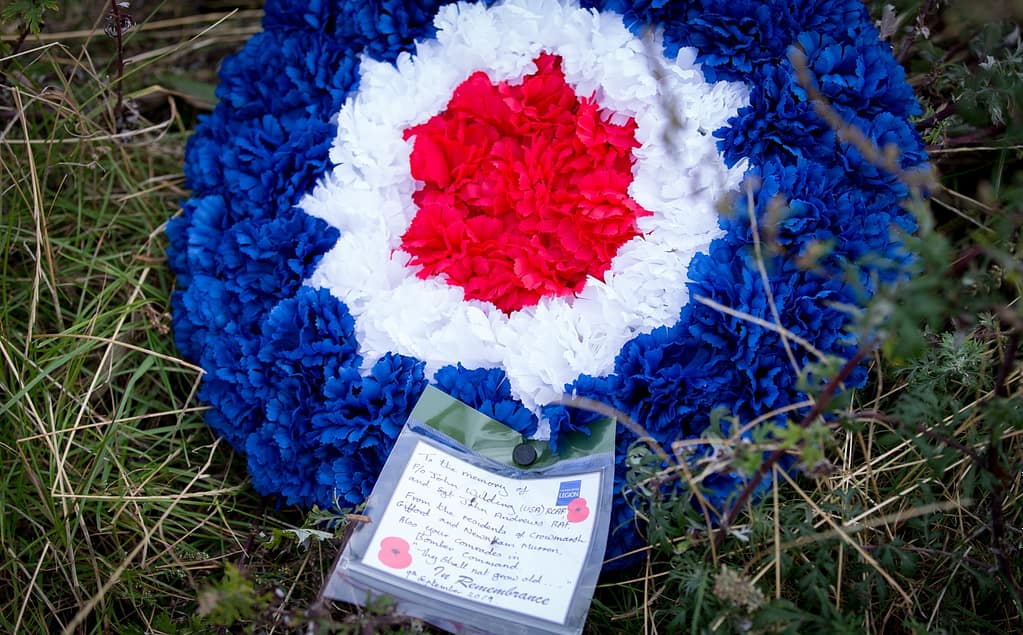 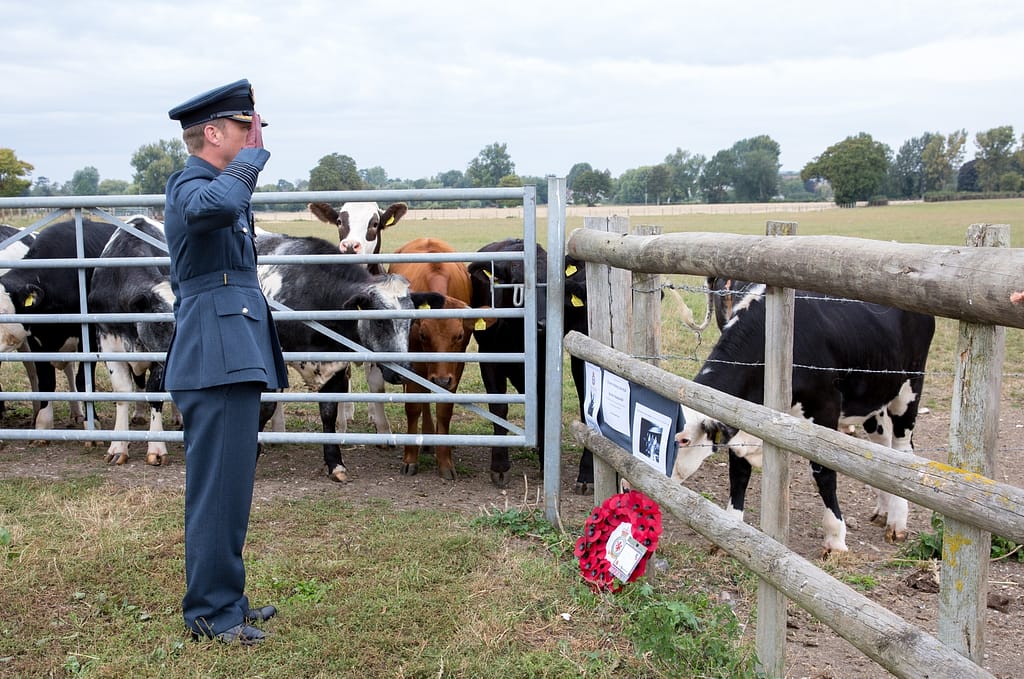 The Mission to Le Havre

This aircraft took off from Linton-on-Ouse, Yorkshire at 0621 hrs on an operational mission to Le Havre, France in support of Allied ground forces besieging the port. At 0812 hrs when over the target area the order to abandon mission was received and the pilot headed back to base.

Bombs jettisoned into The Channel

As the aircraft was overweight for landing four 500 lb bombs were jettisoned into the Channel. At 0855 hrs, while approaching Reading at a height of 10,000 feet the bomb aimer took over the controls and a few moments later the mid upper gunner reported that black smoke was streaming from the port inner engine. Shortly before 0900 hrs the rear gunner saw that the port outer engine was smoking and this was followed by a streak of dull red flame from below the engine.

The Order to Abandon the Aircraft

Skipper, Johnny Wilding, a young man (23) from The Bronx, New York City. There was just Johnny, his mother and two sisters in the family. Johnny enlisted with the United States Air Force, took some flying training but was washed out. Not to be deterred he came up to Canada and enlisted with the Royal Canadian Air Force. He graduated with his wings and the crew first met at a flying school in the middle of England, where the pilots assembled crews and converted to four engined aircraft.

Navigator; that’s me. In civilian life I worked in the Head Office of the Metropolitan Life Insurance Company. I also had visions of becoming a pilot. I signed up as aircrew and did basic training at Lachine, Quebec. My first move was to Dunnville, Ontario. From there I was posted to Initial Training School at Toronto, Ontario; big deal, aircrew advancing this far were allowed to wear a white flash in the brim of your wedge cap. On graduation we were sorted out according to current needs and I was selected to train as a navigator. Upon receiving my wing as a navigator I received my commission as a Pilot Officer and after a short time went to Halifax, Nova Scotia and within a few days I was on my way to England on the Queen Elizabeth, with about 20,000 troops on board. We landed on the Clyde, close to Glasgow and boarded a train to Bournemouth and from there for further training at Millom, on the west coast; when we arrived it was raining and two weeks later it was still raining. I was then posted to the Conversion Unit; this was the first meeting of all the aircrew trades.

Our Bomb aimer, Robert Irving, for reasons not clear to me I called him Len; he was a thoughtful, quiet person with a strong power of concentration; a valuable man to have on board. An agreeable gentleman.

Our mid-upper gunner was Grant McCreary, a jovial tease; every crew needs one of these for a few smiles.

Our rear-gunner was Pete MacKay. Pete was a live wire with a difference. I loved to listen to his exploits as a jockey, small of stature and well built. He was married and had one daughter.

Our wireless operator was Thorb “Tommy” Thompson. Tommy was highly skilled in his trade and a married, no nonsense person who wrote faithfully to his wife in his spare time. In civilian life Tommy was a grain elevator operator in Saskatchewan.

The final member of the crew was John Andrew and RAF man. His home was in mid Wales so when we went on leave he headed home; often with his close friend Johnny Wilding.
Thorb “Tommy” Thompson recalled that on his visit to England in May 1990 when he left his burning aircraft he looked back and saw Johnny Wilding fighting with the controls of the aircraft, while John Andrews stood over him trying to help.

The letter from Johnny Wilding’s mother

Johnny Wilding’s mother wrote to the commander of Linton-on Ouse the following letter:
Dear Sir,
Your kind letter of sympathy is gratefully acknowledged and deeply appreciated by my two daughters and myself. The same also is extended to the officers and men of your unit who so kindly sent wreaths and attended his funeral. Your arrangements for his funeral were just as I would have wished under the circumstances.
He was born in England and he gave his life for her. My congratulations go to the men who were so fortunate as to bail out in time and if any of them care to write to me I would greatly appreciate them doing so.
A few days before John died I mailed a package to him. If it has not been returned by the time this letter reaches you, will you please ask the boys of your unit to accept it from me. His loss has been a sad blow to me as he was my only son and a source of consolation to me since my husband’s death two and a half years ago.
God bless you and protect you all.
Yours sincerely
Mrs R (Rachel) Wilding.
Johnny Wilding is buried in the Commonwealth War Graves Commission Cemetery at Brookwood, Surrey.

The letter from John Andrew’s father.

John Andrew came from Little Mill, Kerry Newtown, Monmouthshire.
His father wrote to the commander of Linton-on-Ouse the following letter:
Dear Sir,
As you are already aware, our son Sgt John Francis Andrew was killed when his plane crashed over England on Sept 9th. Two members of his crew attended his funeral; namely F/Sgt G W McCreary and F/Sgt Irving. These two boys arranged to spend their next leave with us.
On their return to the squadron they wrote asking if the other three members of the crew could also come over to see us. We replied to this letter telling them we would be delighted to see them all.
We have made the necessary arrangements for their accommodation.
Yours sincerely
J (John) T Andrew.
John Andrew is buried in Kerry Cemetery, Monmouthshire.

Following the court of inquiry into the reasons why Halifax NP681 crashed, it was assumed that one of the studs holding down the on the port outer engine cylinder number 7 had failed, causing other studs to fail and the loss of the cylinder. The fuel continuing to flow had caught fire, causing the wing to burn through.