An article on the extraordinary lives of Simba the lion and the Wynne-Eaton’s by Trevor Hancock. 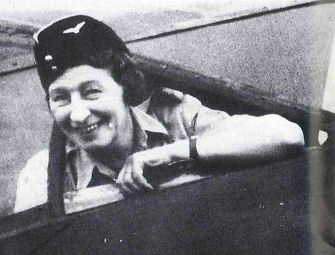 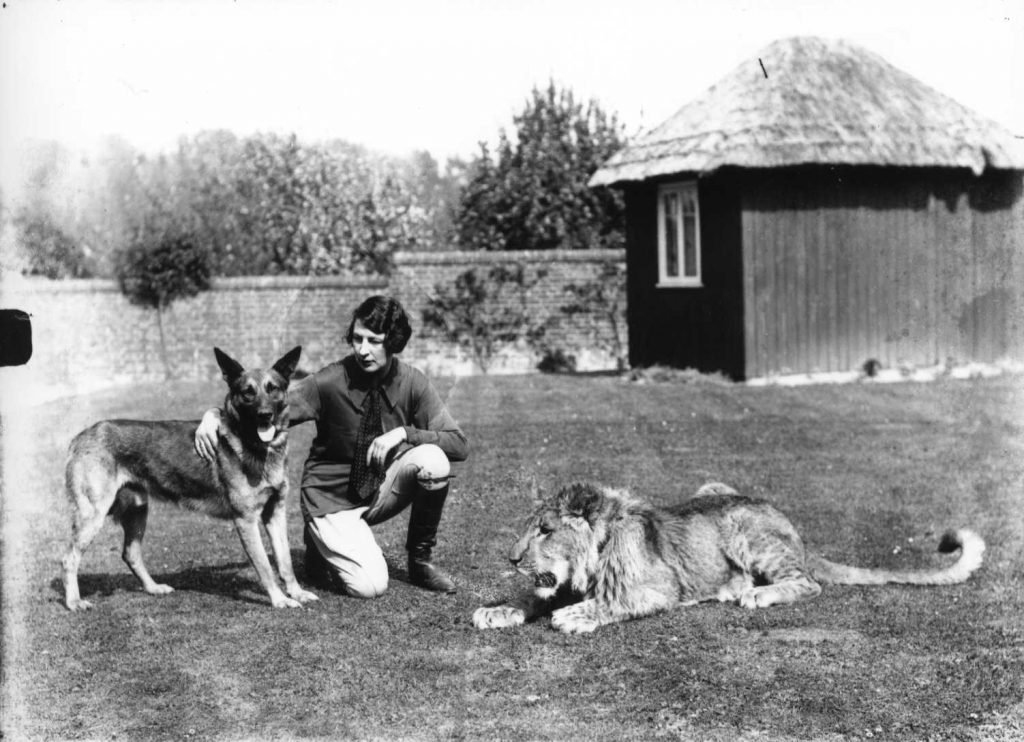 The story starts, with these remarkable photos showing Mrs. Helen Silver (sometimes known as Jane) and her pet lion Simba at Warborough Farm, Letcombe Regis nr Wantage. Born in 1894, the daughter of John Blandy-Jenkins JP of Kingston Bagpuize near Abingdon, Helen Blandy-Jenkins married Stephen William Miles Silver (known as Bill) of Letcombe Regis in 1914. The Silver family first came to Letcombe Regis in the late 19th Century when Bill Silver’s father Stephen William Silver (son of Stephen Winkworth Silver founder of Silvertown in London) bought the Manor House. On retirement, he made Letcombe Regis his home where he started a private natural history museum and collection. This is now at the Oxford University Museum of Natural History.

After the deaths of Mr Silver snr and subsequently his wife Sarah in 1908, the Manor House was sold and the Silver family home became Warborough Farm between the village and the Ridgeway. Helen Silver was an inveterate traveller, especially to Africa where she had family. On one such occasion in 1926, Mrs. Silver brought back a lion cub. This was added to a collection of wild animals that she owned. The collection was looked after by Mr. Brook Alder, the Bailiff of Warborough Farm, who became well-known as a wild animal keeper and trainer acting on Mrs. Silver’s behalf.The lion was kept on the front lawn of the farm and house, sleeping in a horse box and Helen was often seen taking the lion for a ride in the car. The lion’s existence reached the press with the Nottingham Evening Post reporting on 23/5/1927:
A by road passes close by (the farm), and neighbours, who drive or ride horses past the lawn report having had some exciting experiences! In most cases, their horses are stated to have taken fright suddenly, without apparent reason, in other instances the lion has been known to fix his eyes on the horses and roar at them. People living in two cottages only about 100 yards away are stated to have long since accepted the lion as part of the natural setting and are on good terms with him.
Inevitably this could not last, and Simba was taken to Edinburgh Zoo in June 1927.
As to Helen Silver, she began flying lessons and qualified as a pilot in August 1930, flying a Moth aircraft to Kenya to visit family two months later, and returning the following year in the same way. Whist in Kenya, she had met Sandy Wynne-Eyton who was to become her 2nd husband, after her divorce from Bill Silver.

Charles Sandford Wynne-Eyton (known as Sandy) who was born on 22nd October 1889 at Mold Flintshire  was the son of Charles Edward Wynne-Eyton and his first wife Aline Mary (nee’Wills).

Joining the Royal Field Artillery on the outbreak of WW1, Sandy went to France in February 1915 to serve with 127 Battery Royal Field Artillery as a 2ndLieutenant. It was whilst observing for them near Ypres on the 24th May 1915, that a shell burst close to him burying him in some sandbags and removing his gas mask resulting in him being gassed. As a result he was incapacitated for the next three months.

On recovery Sandy decided to join the Royal Flying Corps as a pilot and by the 30th December 1915 he was a Captain and flight commander in No 2 Squadron RFC flying amongst other aircraft the BE2. Later he was appointed a Major in command of a RFC Training Camp in England. On October 24th 1916, in London, Sandy Wynne-Eyton married his first wife, Frances Carbutt who in WW2 became a senior WAAF officer at Technical Training Command.

By the end of the war, Sandy had been mentioned in despatches twice and awarded the DSO in the 1918 New Year Honours List. Remaining in the RAF post-war he served in Ireland in the early 1920s and then went to India to command no 28 Squadron RAF.

Then in 1927 he left the RAF to become a tobacco planter in Rhodesia. However Sandy kept his flying activities going  as he became the first flying instructor in Rhodesia, where he had gained the nickname Moth-Eyton. He was a founder member of the Salisbury Light Plane Club  (in Rhodesia)in 1929 and helped to pioneer the Kenya to Salisbury route in a DH60 Cirrus Moth the same year before leaving to join Wilson Airways in Nairobi where he met Helen . In 1930, Sandy Wynne-Eyton made an attempt to cross the Atlantic emulating Charles Lindberg’s lone flight across the ocean. Taking off in his Puss Moth from St John’s Newfoundland, unfortunately shortly after take off, the engine failed and the aircraft crashed to the ground bursting into flames. Sandy was rescued severely injured. On recovery from this gallant attempt, Sandy returned to Kenya.
It was here that subsequent to his own divorce, that he and Helen married. The couple started a flying business in East Africa delivering the mail and transporting passengers.  On the outbreak of WWII, the couple offered their airline to the RAF. Aircraft and pilots were accepted and Sandy Wynne-Eyton was re-appointed  Squadron Leader, whilst an order was put through giving his wife the rank of Sergeant pilot.
Sandy left Kenya and by October 1940, he was based at RAF Heliopolis with 267 Squadron eventually becoming its CO and promoted to Wing Commander. 267 Squadron was a transport squadron for operational duties in Egypt. In August 1942, operations extended to transport throughout the Mediterranean area and it also undertook supply-dropping missions to resistance fighters in Italy and the Balkans. Notable flights for Sandy at this time included him flying Air Marshal Tedder from Cyprus to Helopolis in a Lodestar and Field Marshal Smuts on another trip. He also flew the Hon Mr Saw (Burmese Prime Minister) on a Middle East and South African tour. In July 1942 Sandy was posted to 163 Squadron as their CO and then returning back to 267 Squadron. In February 1943 he was posted to HQ RAF Middle East (later to become the Mediterranean Allied Air Force). During WW2 Wing Commander Wynne-Eyton was mentioned in despatches twice more and in June 1944 awarded the Air Force Cross (AFC). It is not clear from Sandy Wynne-Eyton’s service record, his movements between February 1943 and November 1944 but it is probable that due to his long flying experience  (over 1000 hours) he had become the pilot of choice for flying VIP’s around at this time.

In any event, Sandy Wynne-Eyton was the pilot of Liberator AL584 which took off from Algiers bound for Paris with four other crew members and six passengers on 14th November 1944. The passengers included Air Vice Marshal G G Dawson (responsible for logistical support services in the Middle East), Group Captain E H MacDonald (CO of 144 Maintenance Unit – to which the plane belonged), Captain Jean Schneider and his wife Francoise and Andre Calmels a French Engineer. Jean Schneider was part of the French industrial dynasty whose factories had been used for German war production and had recently been bombed so there is a suspicion about what happened next. The aircraft crashed with no survivors at Saint Prix near Le Creusot very near to one of the Schneider factories. Had there been a request to the pilot to fly nearby to view any damage? One will never know. The causes of the crash are given as:  ‘flew into a mountain in snowstorm near Autun’ – also there is the hypothesis of the bad setting of the altimeter is advanced’.  The RAF servicemen were eventually buried at Choloy Military Cemetery near Nancy.

The First Female Pilot of the RAF

Helen remained in East Africa, flying mail runs and passenger aircraft. As such, she is regarded as one of the first female pilots in the Royal Air Force. The RAF Museum at Hendon has a copy of a letter from the AOC Air HQ East Africa dated 29/10/1943, thanking her for her service with the East African communications flight. There is also a file, at the National Archives Kew related to a complaint made against Helen Wynne-Eyton, by Imperial Airways during her time as a pilot. Apparently, she was the pilot of an aircraft which had quite a bumpy landing and the passengers felt quite aggrieved to have been flown by an amateur  lady pilot. The matter reached the Governor of Kenya who received a letter from the OC commanding the RAF in Kenya saying “the word amateur is admittedly not easy, but as the lady pilot concerned has more flying hours to her credit than the majority of regular RAF pilots now in the service, the term amateur appears to been used somewhat loosely”. After the war, Helen Wynne-Eyton remarried to David Christie-Miller, a farmer who later became High Commissioner in Kenya. She died in 1955.

We would like to thank the Vale and Downland Museum Wantage for the use of the lion photos.

BMMHS would like to thank Trevor Hancock of White Horse Ancestors for kindly providing this article.

About The Author - Trevor Hancock

Trevor is a genealogist and local historian offering a research service in the UK both online and at various record offices. He has been involved in family and local history for many years.

White Horse Ancestors is a Local, Family and Military History Research Service based in Wantage Oxfordshire.