The Angels of Mons

An early case of ‘Fake News’

Fought on 23rd August 1914, The Battle of Mons was the first major engagement of The Great War. The British fought well against the numerically superior German First Army, but were eventually forced to retreat. During this withdrawal, British soldiers witnessed a strange and miraculous event that was believed to have saved many lives.

As the Germans threatened to encircle and wipe them out the ghostly forms of archers appeared from nowhere to confront the Germans and hold them back. By their appearance, these supernatural saviours harked back to another great feat of arms, The Battle of Agincourt. At the time, many people believed this was a sign that God was on Great Britain’s side against a wicked foe. However, all was not as it seemed.

The Ghostly Bowmen of Mons

Arthur Machen (real name Arthur Llewellen Jones) was a popular writer of fiction at the time of The First World War. When the Battle of Mons occurred, he was employed by The Evening News to write both factual and fictional articles.

Reading reports of the battle, Machen had the idea for a short story called ‘The Bowmen’. In it he imagined being a British soldier at Mons calling on St George to save them from the Germans. The phantom bowmen from Agincourt duly appeared to fight the Germans and save the day. The story was published in the paper on 29th September 1914. It was at this stage that Mr Murphy and his famous Law came in to play.

When submitting the story, Machen did not specifically describe it as a work of fiction. This was not because he wanted to deceive anyone, it was a plain and simple omission. By chance, a factual article entitled ‘Our Short Story’ appeared in the same edition and the two stories became conflated.

It was not long before Machen’s fictional story was taken to be fact in many readers minds. He began receiving letters asking him to provide evidence for the miraculous event on the Mons battlefield. Then, requests from editors of parish magazines came in asking if they could reprint the story of the Bowmen in their magazines. Machen was happy for them to do that, but the problem was no matter how many times he insisted the story was fiction, people took it to be fact. Matters came to a head when one priest asked Machen for the facts behind the story. When the author told him he could not provide any because it was a work of fiction, the vicar insisted Machen was mistaken and that the story was completely true. To his dismay, Machen then realised that “I had failed in the art of letters, I had succeeded, unwittingly, in the art of deceit.”

It was clear that what had started out as a harmless piece of fiction had ‘grown legs’ as the journalists say and become viewed as unassailable fact. Embellishments to the original story, all absolutely true of course, began to sprout up like weeds. Apparently, dead German soldiers on the battlefield had been found with arrow wounds in their bodies. It was also claimed that the long bowmen were actually angelic warriors led by St George himself.

No matter how hard Machen tried to claim the story was complete fiction, the bigger it grew. He even republished the story with an extensive introduction rubbishing all the claims of angel warriors and divine intervention. Ironically, that book became a best seller spawning a whole load of copycat publications purporting to prove the angels did actually exist. One even claimed that Joan of Arc had been seen on a battlefield. In 1915, after a thorough investigation, The Society for Psychical Research could find no factual basis for the story. But that just sparked further controversy.

The story dogged Machen for the rest of his life and he became sick and tired of being asked about it. There is little doubt that he heartily regretted ever writing what he regarded as a rather mediocre piece of fiction.

Russians...with Snow on their Boots...

Why did so many people believe in this fantastic story which was obviously a work of fiction? Well, this was a dark time for Great Britain with so many of its young men being killed. A century ago people were also much more gullible and less sceptical than we are today. So, is it any wonder that they would cling on to any comforting signs of divine intervention and the presence of angels?

It was not the only piece of fiction to be treated as fact during the First World War. At the same time as The Battle of Mons, a rumour swept through Great Britain that Russian soldiers had landed from a troopship in Scotland. Their destination was the Western Front. At the time many people believed the story, some insisting they knew the men were Russian because they had snow on their boots. It is unclear where this story came from. Perhaps some wag had started it off after imbibing one too many beers down at the local.

In fact, there was a sizeable Russian expeditionary force in France during the Great War totalling 44,319 men. A monument commemorating all those Russians who fought in France was unveiled in Paris in 2011 by Russian  President Putin and Francois Fillon, the French Prime Minister.

The story of The Angels of Mons has long since merged into our national culture as a modern myth. It resurfaces from time to time in films and books.  In 2001 it was even subject of a hoax involving a Sunday newspaper. If nothing else Arthur Machen’s phantom bowmen provided a much needed morale boost for a nation facing a desperate and dangerous juncture in its history.

Nick’s article coincides with the launch of the BMMHS Publication Glimpses of War our fund raiser for Blind Veterans UK. 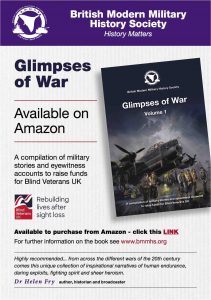 Nick Brazil is an author, film maker and photographer. He has made eight documentaries and numerous shorter videos for the internet. He has also published three books including “Cheating Death – The Story of a PoW” and “Billy Biscuit – The Colourful Life & Times of Sir William Curtis” which is the story of the man who coined the phrase “The Three Rs”