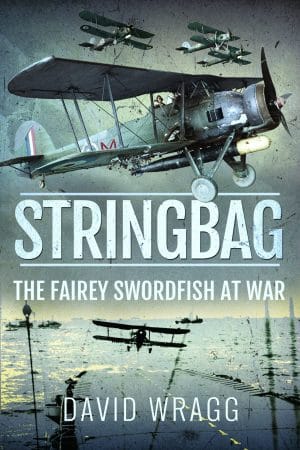 The varied wartime activities of an aircraft much loved, despite its apparent antiquity, are covered by David Wragg. There is no surprise in the fact that the chapter headed “The Stringbags’ Finest Hour” covers the attack on the Italian fleet at Taranto, southern Italy in November 1940.

Other chapter headings include “Taking the Offensive with Force H”, “Dark Days in the Eastern Mediterranean”, “Hunting Germany’s Capital Ships” and “With the Merchant Navy in the Atlantic.”

There are plenty of accounts from those associated with the Swordfish, including one of aerial engagement between a Stringbag and Stukas. Fortunately what happened after the British pilot ditched in the Med and then realised that a depth charge was still attached to his sinking aircraft is amusing rather than tragic.

The author notes that only two VCs have been awarded to Fleet Air Arm personnel but the reference to the Swordfish pilot honoured posthumously, Lieutenant Commander Eugene Esmonde, DSO, seems cursory. Personal accounts of the events of February 12 1942 survive, including that of Wing Commander (later Group Captain) Tom Gleave, Officer Commanding, RAF Manston, from where the Swordfish took off in their attempt to intervene in the “Channel Dash”.

Gleave said that he had had no doubt that the operation was suicidal and that Esmonde felt the same. Gleave went on to record that he stood at the end of the runway and saluted each aircraft as it took off. Later he signed the first recommendation for Esmonde’s VC and would say that the award was made so readily that he bitterly regretted not having put forward more names for the Cross.