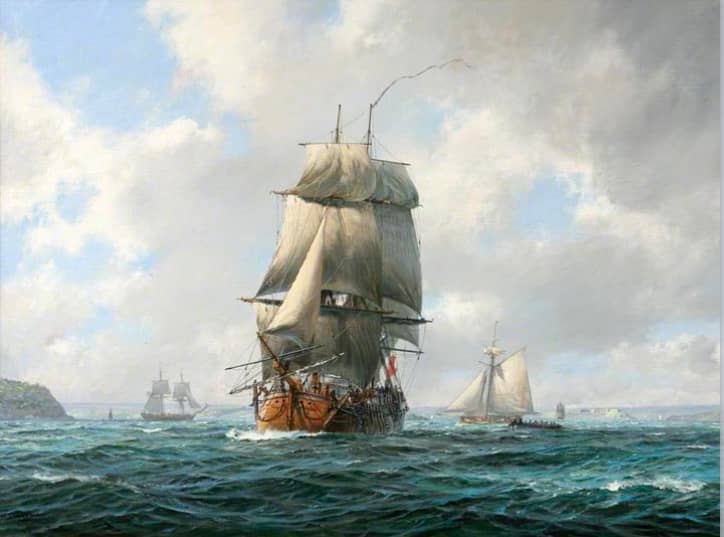 Last night saw  an excellent talk followed by a book signing by naval author, Philip K Allan, author of the Alexander Clay series.  Following a lifetime’s love of the wooden warships of the Napoleonic era, Philip took a packed house through a fascinating presentation of what it was like to live and work in the navies of the day.

From how to navigate the globe using latitude and longitude, the development of the chronometer by John Harrison from an initial one weighing 70lbs to a more refined model that could be hand held, to how the tall ships were build and why the phrase ‘copper bottomed’ has come into the English language.   We learned of how scurvy was the biggest killer on long voyages until the introduction of citrus juices as part of the sailors diet was largely eliminated  – hence the reason why the British are referred to as ‘Limeys’ by our American cousins.   Philip talked of the discipline on ships – often draconian – the munitions, the role of  ‘powder monkeys’, mutinies and some of the great sailors and pioneers such as Columbus and Captain James Cook.

The presentation concluded with questions from the audience followed by a book signing by Philip, with refreshments and chance to mingle over a beer or a glass of wine.

Thanks Philip for a very interesting and informative talk and to everyone who came along to enjoy it.

Philip K Allan comes from Hertfordshire where he lives with his wife and two teenage daughters. He has an excellent knowledge of the 18thcentury navy. He studied it as part of his history degree at London University, which awoke a lifelong passion for the period. A longstanding member of the Society for Nautical Research, he is also a keen sailor and writes for the US Naval Institute’s magazine Naval History.