Pictures From a Forgotten War

In 1915, Henry George Matthews a master brick maker from Buckinghamshire, signed up to join The British Army and fight in the First World War. He was not to know it then, but that act of patriotism probably saved his life. The reason was that he joined The Royal Sussex Regiment which shipped out to India, rather than the mince grinder of the Western Front.

The Royal Sussex ordered to the North West Frontier

These days when it comes to The First World War, there is such a fixation with that one theatre of war, it is easy to forget the many other parts of the world where the conflict spread. The Royal Sussex were despatched to the North West Frontier area of Imperial India for two important strategic reasons. The first was to deal with a number serious uprisings by the warlike local tribes. The second was to ensure that Habibulah Khan the ruler of Afghanistan kept his promise that his country would stay a “friendly neutral”  in the World War.

This had taken on an added urgency with the arrival of an Imperial German/Ottoman Turkish delegation in Kabul in 1915. Known as The Niedermayer–Hentig Expedition, its intention was clearly to steer Afghanistan away from the British to the German sphere of influence.

This was way above Private Matthew’s head of course. All he knew was that he was being sent out to protect Mother India. Before he left, he bought a camera to record his exploits. We don’t know precisely which model he chose, but it was most likely to have been The Vest Pocket Kodak for the sum of £1.10s. Because of its size and portability this folding camera was a great favourite amongst the soldiers in the British Army earning it the title “The Soldier’s Kodak”.

I think the main reason Private Matthews bought the camera was to include pictures of his life in India with his letters home. It is very fortunate that although he had no training or instruction, he was instinctively a very good photographer. The pictures he sent provide a remarkable insight into both Army and local civilian life in pre- independence India.

The return to civilian life

In 1919, Matthews returned to civilian life and, according to his surviving daughter Sally, never picked up a camera again. After all, it was time to “put away childish things” and earn a living and start a family. In 1923 he founded H G Matthews brickworks in Bellingdon near Chesham in Buckinghamshire and in 1925 he married my Aunt Elsie. They went on to have four children. Meanwhile the photographs of Henry George’s time in India were packed away with his letters and simply forgotten. They had served their purpose.

The discovery of these photos

In 1964, I was spending quite a bit of time with my cousin and godmother Theresa Matthews at her home in Dundridge Manor Farm in Buckinghamshire. She was one of Henry George Matthews’ two daughters and had great deal of knowledge about many things, particularly history and archaeology.

It was on one of my many visits that she showed me Uncle George’s (as I called him) India pictures. Although they were quite small contact prints I found them fascinating. Even then I could see their potential as the basis of a book. With this in mind, I asked Theresa if I could take copy photos of the pictures and she readily agreed. I duly shot off a 36 exposure roll of fine grain black and white Pan F film with my Pentax camera.

Then life intervened. I moved away to Cambridge where I had secured a job in a camera shop and the copy negs of Uncle George’s India photographs were stored away and once again forgotten along with the book project. In January 2019, when I was searching through my negative files for a specific image, I rediscovered those copy negs. Although they were only identified as Afghanistan 1915, I knew exactly what they were. After scanning them onto a digital file I was able to look at them in a proper size on my computer. Indeed this was probably the first time in a hundred years they had been viewed in any sort of decent size. The quality of the composition and content of the pictures was immediately apparent to me.

“Pictures Of A Forgotten War”

These are just a few the many excellent pictures he captured and are now seeing the light of day in a book and accompanying illustrated talk I have named “Pictures Of A Forgotten War”. Hopefully Henry George Matthews will now be recognised as the fine photographer he was a hundred years ago.

Nick Brazil is an author, film maker and photographer. He has made eight documentaries and numerous shorter videos for the internet. He has also published three books including “Cheating Death – The Story of a PoW” and “Billy Biscuit – The Colourful Life & Times of Sir William Curtis” which is the story of the man who coined the phrase “The Three Rs”
My illustrated talk “Pictures of A Forgotten War” to The Whitchurch Hill Camera Club is at The Whitchurch Village Hall at 7:30 p.m. on Wednesday 18th March 2020.
The Whitchurch Camera Club is more than happy for any BMMHS members to come along to my talk at 8:00 pm on Wednesday 18th March at the Whitchurch Village Hall. Entry is £4:00. 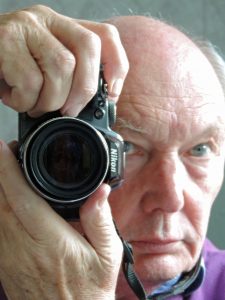