The Gurkhas: Over 200 years of service to Britain 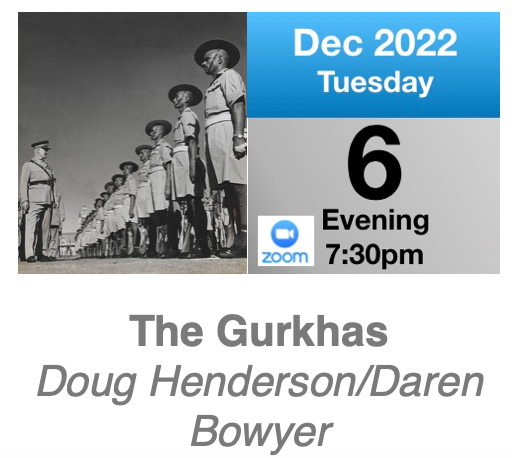 Gurkhas have been part of the British Army for almost 200 years, but who are these fearsome Nepalese fighters?

“Better to die than be a coward” is the motto of the world-famous Nepalese Gurkha soldiers who are an integral part of the British Army.

The Gurkhas have loyally fought for the British all over the world, receiving 13 Victoria Crosses between them.

More than 200,000 fought in the two world wars, and in the past 50 years they have served in Hong Kong, Malaysia, Borneo, Cyprus, the Falklands, Kosovo and now in Iraq and Afghanistan.

They serve in a variety of roles, mainly in the infantry but with significant numbers of engineers, logisticians and signals specialists.

Gurkha soldiers have served the British crown for over 200 years and played a key role in the conflicts of the British and Indian armies from 1815 to the present day.
Doug Henderson or Daren Bowyer from the Gurkha Museum intend to cover some of the more important and enlightening aspects of this history, as well as a background to the origins of Gurkha service and the role of the Brigade of Gurkhas today.

Gurkhas in the British Army

Gurkhas and the Empire

The potential of these warriors was first realised by the British at the height of their empire-building in the last century.

The Victorians identified them as a “martial race”, perceiving in them particularly masculine qualities of toughness.

After suffering heavy casualties in the invasion of Nepal, the British East India Company signed a hasty peace deal in 1815, which also allowed it to recruit from the ranks of the former enemy.

Following the partition of India in 1947, an agreement between Nepal, India and Britain meant four Gurkha regiments from the Indian army were transferred to the British Army, eventually becoming the Gurkha Brigade.

Where does the name Gurkha come from ?

The name “Gurkha” comes from the hill town of Gorkha from which the Nepalese kingdom had expanded.

The ranks have always been dominated by four ethnic groups, the Gurungs and Magars from central Nepal, the Rais and Limbus from the east, who live in villages of impoverished hill farmers.

They keep to their Nepalese customs and beliefs, and the brigade follows religious festivals such as Dashain, in which – in Nepal, not the UK – goats and buffaloes are sacrificed.

They still carry into battle their traditional weapon – an 18-inch long curved knife known as the kukri.

In times past, it was said that once a kukri was drawn in battle, it had to “taste blood” – if not, its owner had to cut himself before returning it to its sheath.

Now, the Gurkhas say, it is used mainly for cooking.

The Gurkhas are now based at Shorncliffe near Folkestone, Kent – but they do not become British citizens.

The soldiers are still selected from young men living in the hills of Nepal – with about 28,000 youths tackling the selection procedure for just over 200 places each year.

The selection process has been described as one of the toughest in the world and is fiercely contested.

Young hopefuls have to run uphill for 40 minutes carrying a wicker basket on their back filled with rocks weighing 70lbs.

Prince Harry lived with a Gurkha battalion during his 10 weeks in Afghanistan.

There is said to be a cultural affinity between Gurkhas and the Afghan people which is beneficial to the British Army effort there.

Historian Tony Gould said Gurkhas have brought an excellent combination of qualities from a military point of view.

He said: “They are tough, they are brave, they are durable, they are amenable to discipline.

“They have another quality which you could say some British regiments had in the past, but it’s doubtful that they have now, that is a strong family tradition.

“So that within each battalion there were usually very, very close family links, so when they were fighting, they were not so much fighting for their officers or the cause but for their friends and family.”

Historically, Gurkhas who had served their time in the Army – a maximum of 30 years, and a minimum of 15 to secure a pension – were discharged back to Nepal.

A Gallant Role in Britains Army

During the two world wars 43,000 men lost their lives.

The 4th Battalion was raised in 1940 and took part in the Second Chindit expedition in 1944 as part of 111th Brigade. The expedition was aimed at disrupting Japanese communications behind their front lines and preparing the way for the main Allied forces to recapture north Burma. The 4th Battalion continued in British service until 1947 when it was disbanded.

The Battles of Imphal and Kohima

Imphal and Kohima were the turning points of one of the most gruelling campaigns of the war. Decisive Japanese defeats, they became the springboard for the Fourteenth Army’s subsequent reconquest of Burma.
In an attempt to forestall an Allied invasion of Burma, the Japanese launched an offensive into north-east India, aiming to capture Britain’s strategic base at Imphal. Moving swiftly through dense jungle, they converged upon Imphal from three sides. At the same time, they isolated the city by striking at Kohima village to the north.
Hoping that their opponents would collapse in the face of such bold thrusts, Japanese plans unravelled when, instead, the Allies held fast. The battle degenerated into a series of vicious close-quarter engagements, in which both sides displayed great courage. Critically short of supplies, the Japanese could not sustain the battle in the pitiless conditions of jungle warfare during the monsoon and against such resolute British defence.

‘Scraggy’ was the British nickname for one of the hills of the 5,000 foot-high Shenam Saddle which was the scene of intense fighting during the Japanese drive along the Patel road towards Imphal in April 1944. The position was a labyrinth of bunkers; trees were reduced to shattered trunks and the hillsides turned into barren wastes by artillery fire. The result was a field of battle reminiscent of the worst fighting on the Somme during World War One.

The 10th Gurkha Rifles were flown to Cyprus as reinforcements to the British base during the fighting between Turkish and Greek Cypriots after the invasion of the island by Turkish forces in 1974.

1st Battalion, 7th Duke of Edinburgh’s Own Gurkha Rifles, served in the Falklands as part of the 5th Infantry Brigade. They played the key role in the attack on Mount William, which along with Mount Tumbledown and Wireless Ridge, was one of the key defensive positions around the capital of the islands, Port Stanley. Many Argentine soldiers surrendered to the Gurkhas without firing a shot – having been frightened by press rumours regarding the Gurkhas’ bloodthirsty treatment of vanquished enemies. © NAM. 1988-09-13-12

The Gurkha Museum commemorates the service of Gurkha soldiers to the British Crown, a relationship that has endured since 1815. It is located in Winchester in Hampshire, England and is part of Winchester’s Military Museums.