A British Hospital Ship at War 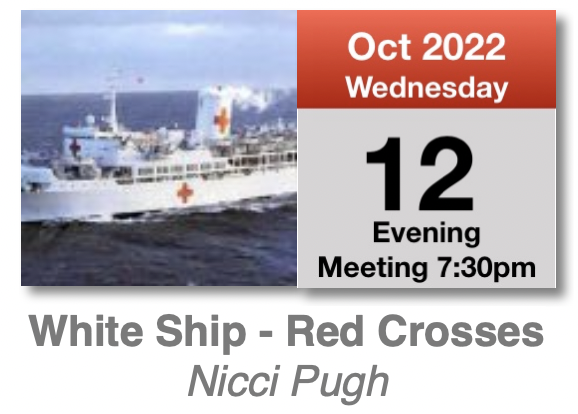 By Author and Falklands War veteran Nicci Pugh
This inspiring, informative & fascinating presentation illustrates the role of a modern-day floating hospital ship working 8,000 miles from home in the South Atlantic Ocean during The Falklands War.
Presenter Nicci Pugh, who served throughout the Falklands War as a Trauma Operating Theatre Sister on board Her Majesty’s Hospital Ship Uganda relays the history in a sensitive & thoughtful delivery, covering all aspects, from helicopter evacuation of casualties from the battlefields ashore & at sea, to the repatriation of recovering patients to UK by sea & air.
The talk completes with up-to-date images of The Falkland Islands today, which include excellent shots of the rare black-browed albatross nesting off remote West Falkland Islands.

“We heard that HMS Sheffield had been sunk… and we all knew our services were now urgently required.”

Listen to Nicci talking about her experiences on BBC Radio Devon

Signed copies of  Nicci Pugh’s White Ship – Red Crosses. A Nursing Memoir of The Falklands War will be available after Q&As.

When Argentina invaded and occupied the Falkland Islands in April 1982 the British Government requisitioned the P&O Educational Cruise Ship SS Uganda, which was then in Alexandria. From there the ship proceeded via Naples to Gibraltar, where a hasty conversion to Geneva Convention/Red Cross livery took place in 3 days in HM Dockyard Gibraltar.

A team of some forty Queen Alexandra’s Royal Naval Nursing Service (QARNNS) personnel with specific nursing qualifications: experience of operating theatres, intensive care units – and in the treatment of burns, which would turn out to be critical, were flown out to Gibraltar by RAF Hercules, to join the ship SS Uganda.
There they were tasked with converting the Uganda from an educational cruise ship into a hospital ship of 500 to 600 beds. During the course of 10 days, they worked flat out and completed the task on the day the ship arrived in Ascension.
On April 19th the ship sailed for the uncertainties of the South Atlantic, returning to Southampton August 9th 1982.

Sailing for the South Atlantic

Helicopter Emarkation of the Wounded

“These are the personal stories of the injured servicemen and the Naval Nurses and Doctors who fought the all-important battle to ‘bring them back alive’.” Brian Hanrahan BBC War Correspondent during The Falklands War 1982

The team of forty Queen Alexandra’s Royal Naval Nursing Service personnel were the only female military personnel working within the Conflict Zone (TEZ), and QARNNS junior ratings the first female RN ratings in history to serve at sea.

More than 700 severely injured servicemen were treated on board the hospital ship while she was operational, which included 100+ Argentinian personnel.

“As I toured the wards of that remarkable ship during my flying visit, I found all of my seriously wounded soldiers who had been helicoptered off the battlefi eld, some of whom I thought I would never see again, and saw for myself the inspirational care of the Naval medical and nursing staff that had saved lives and on which recovery was depending. It was hardly a mile offshore, but it felt a very long way from Mount Tumbledown.” Lieutenant General Sir John Kiszely KCB, MC, Company Commander in 2nd Battalion Scots Guards 1982

Nicci Pugh is an experienced NHS and former military Operating Theatre Sister. In April 1982, whilst serving a short-service commission as a Senior Nursing Officer in Queen  Alexandra’s Royal Naval Nursing Service (QARNNS), Nicci was selected, along with thirty nine other female nursing colleagues, to serve on board Her Majesty’s Hospital Ship Uganda throughout the Falklands War, fought between Britain and Argentina in 1982. The QARNNS nursing teams on board Uganda were the only military females to serve in the Falklands War, and this was the first time in history that British female RN junior ratings had officially served at sea.
Here, in the notoriously windswept South Atlantic Ocean, the teams of Royal Naval medical personnel worked tirelessly aboard their floating hospital, to treat and care for seriously injured servicemen arriving by helicopter from battlefields and dressing stations ashore, as the battles progressed to re-take Port Stanley, the surrounding terrain and, eventually, all the Falkland Islands from their uninvited occupiers. The crucial role of all the military helicopters involved in the casualty evacuation process is clearly demonstrated throughout this fascinating Presentation.
In 2010, following the successful publication of her book White Ship – Red Crosses, Nicci created a series of  accompanying Power Point Presentations, covering the many aspects of how the wider history of international hospital ships has developed over the centuries. The first half of this evening’s Presentation for BMMHS focuses on the conversion, role and work carried out on board the hospital ship Uganda during the Falklands War and is an inspiring and  informative account of life and work on board a British floating hospital working in difficult, demanding & dangerous conditions.
The second half of this Talk relates to the work of the The South Atlantic Medal Association, the tri-service charity for veterans of The Falklands War www.sama82.org.uk  This section includes excellent and unusual shots of life in the Falkland Islands today, including some of the rare black-browed albatross nesting off the remote West Falkland Islands.
Nicci Pugh’s father was the late Captain C.R.V. (Dick) Pugh CBE RN, a Second World War Tiger Moth & Swordfish Fleet Air Arm pilot of some renown, who served in the Royal Navy from 1916 to 1950.
Speaking to us at BMMHS when we first made contact with her last year, Nicci said: “Like many of his generation, my father rarely mentioned his extraordinary RN and aviation career, but I felt it appropriate to include a reference for BMMHS members that, as far as we know, I was the only  ‘RN officer daughter of an RN WW2 officer’ to serve in the Falklands War. As we approach the 100th anniversary year of the formation of the Fleet Air Arm in 2024, it’s worth reflecting how far military, and especially Royal Naval carrier-based aviation, has advanced since my father’s era of the formative Fleet Air Arm. Not only including the Falklands War, but now, with an eye to the future, commissioning the amazing state-of-the-art British aircraft carriers HMS Queen Elizabeth & HMS Prince of Wales.”
Nicci is also a keen offshore sailing lady and remains an active member of the Royal Naval Sailing Association. She kept her last boat, White Berry, on the River Thames, and in 2016 brought her upstream single-handedly from Walton-on-Thames to Bensons Marina just a few miles from Woodcote.