Landers a Fighter Ace in the Pacific and in Europe

In April 1942, Landers delivered a new Curtiss P-40E fighter to the 49th Fighter Group then based near Darwin, Australia.  The next day he found himself flying one into combat against a Japanese bombing attack, downing two of the enemy. By the end of the year he had shot down a further four Japanese aircraft.

Flying instructor back in the USA

Having completed his tour of operations, he took up the duties of a flying instructor back in the USA. This policy  of operational tours and non-operational tours for rest purposes, was used by the RAF and USAAF but was a luxury that Japan and Germany could not afford.

Landers requested a further combat tour and on 27th April 1944 was posted to the 8th Air Force England, where he joined the 55th Fighter Group at Wormingford Essex. This unit was flying the distinctive Lockheed P-38J  Lightning, the twin-engined, twin-tailed escort fighter.  Landers first victory in the ETO came a couple of months later.

The day before independence day he was made C.O. of the 38FS  (Fighter Squadron) one of three component squadrons of the 55FG (fighter Group). Four days later saw his tally of victories rise by three. Landers’ unit was protecting a group of bombers over Germany, when an assortment of Luftwaffe fighters intercepted the raid.  Landers led a flight of 4 Lightnings down on to twenty Messerschmitt Me410 ‘bomber-destroyers’.  The engagement lasted 20 minutes and Landers’ score had reached 10.

The arrival of the latest North American P-51D Mustang

Before the month of July was over, the 55FG had exchanged its Lightnings for the latest North American P-51D Mustang and Landers named his mount ‘Big Beautiful Doll’.  The aircraft bore the code letters CG-O.

Escort mission to cover B-17 bombers

In August Landers was assigned to lead the Group on an escort mission to cover B-17 bombers which were to fly a shuttle mission to Russia.  (Known as Frantic,  bombers flew to targets deep into enemy territory, well beyond the point of no return. They would  land in Russia then operate  a mission from that end). Landers unit wasn’t to go to Russia but as far as Gdynia in Poland.

Once airborne, Landers new Mustang was running rough.  Not to be deterred, he radioed base to have another aircraft readied. He landed, swapped machines, took off and caught up with his comrades to resume leadership.  The round trip of nearly 1,600 miles to Gdynia took 7.5 hours and was at that time a record for a fighter group based in England.

On 11th October John D. Landers now a Lt. Colonel, moved to Leiston in Suffolk, to take command of the 357th FG also flying Mustangs, with that group’s distinctive red and yellow checkered noses.  Once more he named his Mustang Big Beautiful Dolland during November destroyed a Messerschmitt 109.  At the beginning of the following month with his second operational tour completed, Landers returned to the USA.

On February 22nd 1945 Landers started a new chapter in England, arriving  at the famous airfield of Duxford near Cambridge, to take command of the 78th Fighter Group.  This group had recently relinquished its Republic P-47 Thunderbolts in favour of the Mustang.  Landers was assigned P-51D–20 (serial number 472258) and this became his third Big Beautiful Doll.
The aircraft was highly decorated on top of the polished aluminium  finish.  Black and white nose checks were the colours of the 78th FG, whilst the black rudder and ‘WZ’ code letters identifies the 84th Fighter Squadron within that group.  (The other two component squadrons of the Group were the 82nd FS red and coded ‘MX’ and 83rd FS white and coded ‘HL’).  The black and white propeller spinner would have given the impression of wobble when viewed from head-on. Anything that might throw the aim of the enemy pilot was welcome.
Within a week of his arrival at Duxford, Landers shot down two Bf109s on the same mission. This was followed by another one  just over two weeks later bringing his score to 14.

Shooting down an Me262

On the 30th March Big Beautiful Doll shared in the destruction of the Luftwaffe’s best – the Messerschmitt Me262 jet. Shared victories were officially recognised by the USAAF and so Landers final score as an ‘ace’ reached 14.5.  However Landers personal score displayed on the side of his aircraft shows some 36.5 victories.  Aircraft destroyed on the ground by strafing attacks do not figure in ace’s totals, but such work was extremely hazardous, particularly at the closing stages of the war, when airfields available to the Germans were getting fewer and the ground defences were very effective.

One such ground attack mission was April 10th 1945.  This was a busy day for the 8th Air Force, with some twenty Me-262 jets being shot down, most as they were about to land.  A number of Fighter Groups were engaged in shooting up enemy airfields. An amazing 284 aircraft were claimed damaged or destroyed. Lt Col John D. Landers accounted for 8 of these.

The war in Europe was over

By May Landers was promoted to Colonel and the war in Europe was over.  At this time Landers’ aircraft displayed his ultimate rank on the aircraft’s hood, the wingtips too had black and white checkerboard and as mentioned already his personal tally of 36.5 victories were displayed beneath the cockpit.
At the end of June Landers took his Big Beautiful Doll to Little Walden, Essex, where he was to  command the 361stFighter Group.  Here the Mustang’s code letters were changed from WZ-I to E2-I and doubtless the nose, wingtip  and tail colours were replaced with the yellow of the 361st FG.
After finishing with the destructive work of war, John D. Landers entered the construction industry.  He died in Texas in 1989. 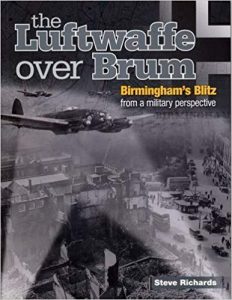 Steve Richards is the author of The Luftwaffe over Brum