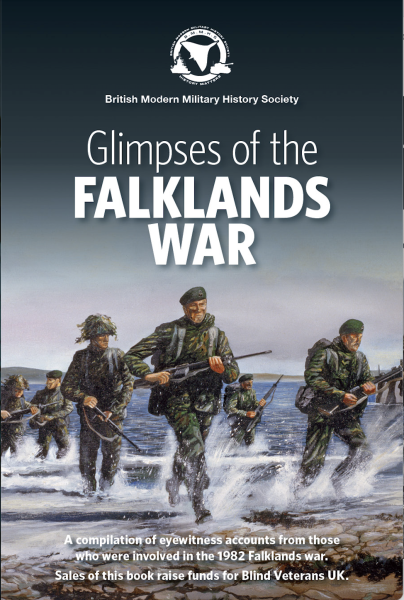 When Blind Veterans UK was founded In 1915, our mission was to help soldiers blinded during the First World War. Today we offer lifelong support to Armed Forces and National Service veterans – no matter what the cause of their sight loss, and regardless of how long they served.

Glimpses of The Falklands War

The latest book in the Glimpses of War series, Glimpses of the Falklands War, is currently being compiled and edited as we speak. As with other volumes of Glimpses of War, all profits will go to the charity Blind Veterans UK.  #blindveterans

We have had an overwhelming response to the request for articles and contributions from as far afield as the Falkland Islands, Canada, Argentina, the USA  and of course the UK. The experiences and stories are from military personnel from all the services, civilians, Falkland Islanders, Argentines and more. Some are from well-known names from the war, while many are from the ranks of service men and women who served as young adults. The experiences of the Falkland Islanders who were under occupation and bombardment for seven weeks are graphically described.   Likewise  the stories and memories of those serving on ships that were sunk and those soldiers telling of fierce fighting in atrocious weather conditions to get to Stanley are vivid and emotional. There are also contributions from lesser recognised quarters such as military intelligence, the dockyard workers who prepared the ships for war, the aircrews who rescued survivors from  blazing vessels, and the medics and chaplains who healed and comforted the bodies and minds of friend and foe.

The appeal for articles and contributions has now closed, so thank you to those who have sent in their stories.

Glimpses of the Falklands War will be published in May to coincide with the 40th anniversary, and will be available on Amazon.

Please tell your friends and associates about this project, and do buy the book once released as it is for a very worthy cause.

Chairman, BMMHS and Editor of Glimpses of the Falklands War

Glimpses of War Volumes one and Two are available on Amazon. Click below

‘The Royal Marines landing at San Carlos’ by David Rowlands

In the early hours of darkness on 21st May, 1982 eleven ships, led by Fearless and Intrepid, sailed towards Falkland Sound, the channel between East and West Falklands, and into San Carlos Water. A Force 8 gale had been blowing for days; low cloud and heavy rain kept enemy aircraft at bay. But as the Task Force sailed into San Carlos Water and the landing craft put out from their mother ships, the sea was dead calm beneath a clear, cold sky twinkling with stars.

The Royal Navy’s 4.5-in. guns opened up on the Argentinian troops on Fanning Head. 40 Commando Royal Marines and 2 Para, heavy laden with equipment and weapons, clambered into the landing craft in the darkness. They were the first ashore, wading for the last few yards waist-deep towards Blue Beach. 3 Para’s objective was Port San Carlos Settlement. By 0730 hours the landings by 40 Commando and 2 Para on Blue beaches 1 and 2 were complete.

As the dawn rose, the next wave, 45 Commando, faces blackened, wearing a mixture of berets and helmets, splashed ashore at Red Beach in Ajax Bay, while 3 Para, followed by 42 Commando in reserve, came ashore at Green Beaches 1 and 2 close to San Carlos Settlement. The surrounding green hills were bathed in bright morning sunshine.

Once ashore, the units dug in, as helicopters ferried in guns, ammunition, stores and vehicles. In the darkness the Argentinian defenders had withdrawn, and it was to be a few hours before their first response was to fire a machine-gun at two of the Gazelle helicopters, killing three men.