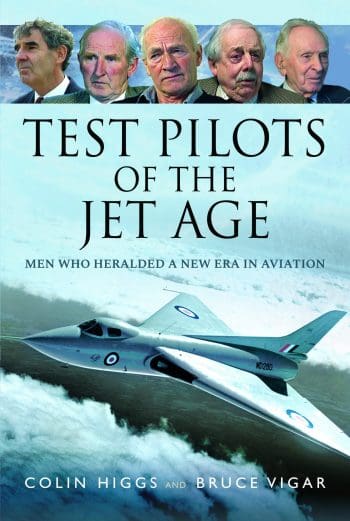 As the “Jet Age” developed after the Second World War some media stardom came the way of the pioneering pilots. A particular childhood memory of mine is of the coverage in 1956 when the former naval officer, Peter Twiss, achieved a world speed record flying the Fairey Delta 2 (FD2).

Twiss is one of the test pilots whose reminiscences are included in the latest book from Higgs and Vigar. Twiss is quoted as commenting that, “A lot of people say, ‘What’s it feel like to go faster than the speed of sound?’ and you’ve really got to say there’s absolutely no sensation at all in the aeroplane. All you see is a flick on the Mach meter when the shockwave passes the static vent and then after that it’s all smooth and very silent. Everyone says, ‘Can’t you hear the bang?’ No you can’t hear the bang in the aeroplane, that’s left for the people on the ground.”

Some inaccurate information seems to have crept into the account of “Bee” Beamont’s early career. It would have been a remarkable achievement to have only started to learn to fly (as a civilian) on September 2 1939, “the day after the declaration of war with Germany”, and then fought in the Battle of France and the Battle of Britain. I consulted five sources. Wikipedia agreed with the authors. The others, all of which I would regard as authoritative, gave a significantly earlier date.