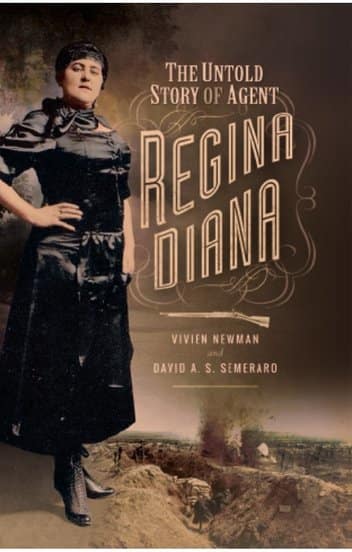 Authors Drs Newman and Semeraro are aunt and nephew. Dr Newman is an expert on women in the Great War, particular in unearthing the stories of those we may never have heard of, hence this book. Dr Semeraro has served as a medic with the Swiss army.

Hints of Diana tantalisingly surfaced while Dr Newman was researching Mata Hari for another book, but she was elusive. It turned out that Diana had lived in Switzerland, where Dr Newman’s sister lives. Dr Semeraro became intrigued and would not let his aunt give up searching for Diana. To cut a long story short, the French ultimately released the relevant files and there she was. That part of the story is almost as fascinating and intriguing as Diana herself!

Marie-Antoinette Avvico had an Italian father, a French mother and Swiss citizenship as they lived in a run-down area of Lausanne. Briefly married with a daughter, later taking up with a mechanic called Cherix (no Christian name is given). Cherix smuggled varies commodities, including rubber, which in the early 20th century was the new gold and had already attracted the attention of the Germans. Marie-Antoinette had trained as a milliner making kepis and spent some time working in Paris, near to the Château de Vincennes, the military HQ. She had also become a music hall performer and there is a very interesting chapter on the importance in France of the Café-Concert, which dates from the Revolution. Marie-Antoinette had chosen Régina Diana as her stage name and this was the name she came to be known by in her spying activities. Diana performed regularly in Marseille, which of course was a major port. Her places of employment therefore put her in a very advantageous position to watch and hear useful information. Before the war started she was regularly criss-crossing the borders, which her nationality and Swiss citizenship enabled her to continue unnoticed once hostilities started and so it is no surprise that her relationship with Cherix brought her to German attention and they became keen to recruit her. At six feet tall and rather ‘buxom’, it is unlikely that she would be considered irresistible by 21st century standards, but at the time she apparently had no trouble getting men to fall at her feet! For some reason never explained, she hated the French.

The authors have included pen pictures of other female ‘spies’ of history, including the more well know Louise de Bettignies. A very eye-opening chapter on Switzerland and her neutrality (or not!) in the war, describes how the country was a haven for spies of all sides and for those who were happily helping to re-arm all sides; which all contributed to threatening that very neutrality. It would appear that Swiss ‘sympathy’ was probably with Germany as there were more German than French Swiss.

Diana was recruited by a woman called Elisabeth Shragmüller (aka Fraulein Doktor) who was also responsible for Mata Hari. Spying in the Great War was a far cry from 007 and all Q’s gadgetry, but Diana was far more organised and effective than Mata and went undetected for 2½ years before she was caught; it has to be said by sheer bad luck.

P&S titles are very ‘patchy’ on quality. This book is as good as the last one I read was appalling. An intriguing story. Recommended.