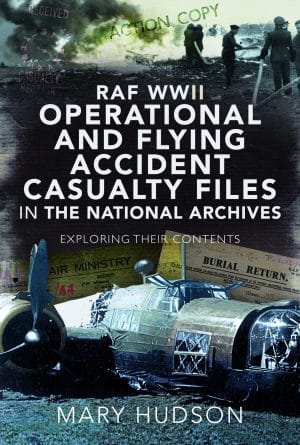 Mary Hudson could hardly have a better background for explaining this important resource for researchers of RAF history. As well as service in the WRAF and RAF and her academic qualifications, she spent 14 years working for the Air Historical Branch (RAF) within the Ministry of Defence.

The book covers the foundation and work of the RAF Casualty Branch, the source and classification of records and understanding their contents. It is aimed at the military researcher but also at those with little knowledge of the services, working on family history. Many documents are reproduced.

If anyone doubts that the British, Commonwealth and American authorities take seriously the recovery and identification of those lost then there is overwhelming evidence to the contrary here.

The author takes her readers into the detail of the procedures established and the issues arising from the involvement of various organisations, explaining for example, “It was Air Force policy that lost crews lay together in death. To ensure that this was the case the Canadians issued an instruction that RCAF personnel flying with a crew from other nations were not to be exhumed and concentrated to Canadian War Cemeteries but were to be buried with the members of their crews. The Imperial War Graves Commission caused some consternation when the Commission ruled that graves that were already in established war cemeteries could not be moved again. These graves remain the exception to the Air Force policy of graves lying together.”

Having written this review, I am putting Mary Hudson’s book in an easily accessible position in my collection.