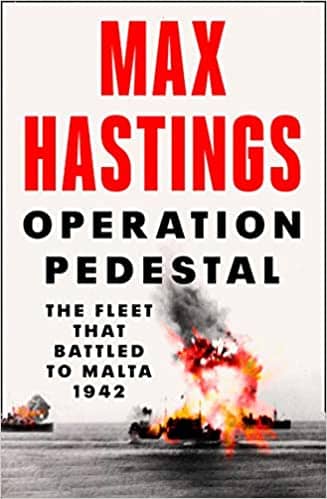 On 13th and 14th August 1942 four battered and damaged merchant ships escorted by what was left of their naval escort arrived in the Grand Harbour, Valletta, Malta, bringing  23,000 tons of food and general stores, and 5,500 tons of military stores to the beleaguered island. On the 15th the severely damaged tanker Ohio was towed into port by three destroyers who had remained with the sinking tanker determined to bring her in, and two tugs. She carried 1, 430 tons of kerosene, 8,695 tons of aviation fuel, 902 tons of bunker fuel and 2,000 gallons of lubricating oil. These supplies enabled the island, which had been blockaded and bombarded, and on the brink of surrender, to survive until the success of Operation Torch changed the situation in the Mediterranean.

In his new book Max Hastings has turned to the role of the Navy in the Second World War as he believes that the Royal Navy had a vitally important part to play in the British participation in that war. In a mixture of vivid narrative and detailed analysis he describes the course of Operation Pedestal, which he describes as “One of the fiercest sea battles of the war”.

Churchill was very aware of the strategic importance of Malta and also its importance for the morale of the allied forces at a time when Britain’s military fortunes were at their lowest ebb in the war and Churchill’s political reputation was on shaky ground. Hastings points out that Churchill’s “End of the beginning” speech was still three months away. Consequently, it was decided that Malta must be saved “at all costs” and preparations began for the largest naval operation of the war.

The convoy comprised fourteen fast merchant vessels, the most important being Ohio, the only large, fast tanker available, which was a US ship loaned to the British, with a British crew. As insurance against the loss of Ohio and its 12,000 plus tons of oil, the other ships carried fuel in drums. The merchant vessels were escorted by two battleships, three aircraft carriers, seven cruisers, thirty-two destroyers and eight submarines, the largest escort force yet. Also under the protection of the convoy was aircraft carrier Furious, carrying much needed Spitfire aeroplanes which would fly off the carrier to Malta when the island was in their range. The convoy faced attack by the Italian Navy and German and Italian Air Forces. The convoy’s size is an indication of the naval planners’ appreciation of the risks involved, as not all were expected to get through to Malta and the navy was prepared for heavy losses amongst its ships.

The fleet assembled was codenamed Force F, but the plan was for the whole fleet under the command of acting Vice Admiral Neville Syfret to accompany the merchant ships only as far as the Sicily Narrows, for fear of coming under attack from the Italian Navy and submarines. The merchant ships were to continue to Malta under the protection of Force X under the command of Rear Admiral Harold Burrough, with an escort of four cruisers, twelve destroyers and nine appropriately stationed submarines.

The progress of the convoy is vividly described from the first loss of the carrier Eagle, hit by four torpedoes from U-73 on August 11th, to the arrival of the badly damaged Ohio nursed into Malta on the 15th August. Hastings gives a vivid appreciation of the necessity of Syfret’s main fleet to turn back when they reached the Skerki Banks and unfolds the story of loss after loss of merchant ships attacked by aircraft and submarines and the effort of the crews of the naval and merchant ships to reload salvaged goods and surviving men onto their rapidly declining number of ships and to try and prevent the scattering of the convoy as much as possible. There are some salient points made about the good and bad decisions of the commanders of Force F and Force X and the captains of the ships, detailing the increasing exhaustion and strain on all the men as the convoy progressed. He comments on the skill of the Italian navy and air force, and the inability of the aircraft on the carriers, Albacore biplanes, Fulmar, Hurricane and Martlet fighters, to bring down enemy aircraft. Much confusion was caused by inefficient communications between ships. In his analysis, Hastings has placed Operation Pedestal in the context of the development of the convoy system throughout the war. Lessons learned from the operation included the realisation of the vulnerability of ships to air attack and the difficulty of combating it.

However, the convoy, although much reduced, did arrive in Malta, including the most important  vessel, the Ohio whose cargo including aviation fuel, oil petrol, kerosene and diesel, enabled the continuation of the Spitfire attacks on axis shipping. The book devotes a chapter to the bravery and sheer dogged determination of the destroyers Bramham, Ledbury and Penn in towing and nosing the severely stricken and nearly sinking tanker into the Grand Harbour at Valletta.

Hastings details the arguments of those historians who do not consider Operation Pedestal to be in any way a success but makes a measured argument for it to be claimed as a strategic victory in which the losses were acceptable for the gains made, i.e. the re-supply of Malta and the maintenance of the morale and prestige of the Royal and Merchant Navies at a crucial stage of the war. He praises the bravery and determination of the seamen who “redeemed from the brink of disaster one of the most hazardous naval operations of the war.”

Hastings denies that this book is definitive study, but the narrative gives a vivid and enlightening perspective on the operation, including accounts of the bravery and endurance of individuals under almost constant attack.

Churchill said that the loss of Malta the would be “a disaster of the first magnitude to the British Empire” and Max Hastings’ fast paced and well researched book explains how that eventuality was avoided by the Royal Navy and  Merchant Navy  men involved in Operation Pedestal.