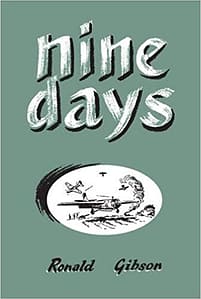 The 75th Anniversary of Operation Market Garden has given the opportunity to hear the stories of some of the veterans of Arnhem and reflect once more on the heroism and sacrifice of those involved in what remains a controversial operation of the Second World War. So it is timely that the memoirs of Ronald Gibson, a glider pilot at Arnhem, should have been republished. Nine Days is an account which adds to our understanding of the battle from a personal and detailed point of view.

The Glider Pilot Regiment had been formed in February 1942, the Air Ministry having decreed that glider pilots would  be part of the army and that glider pilots would be officers or NCOs.  Lt Col George Chatterton, then second in command, made it very clear the calibre of man that would be allowed to enter the Glider Pilot Regiment, in an address to a new intake: “A soldier who will pilot an aircraft and then fight a battle, a task indeed … only the best will be tolerated.”

Ronald’s narrative begins with the often hair-raising experience of taking off and being pulled by powered aircraft and joining in the streams of tugs and gliders assembling for the flight to Holland. His glider contained  a six-pounder gun and a jeep, along with the gun crew. The carrying of light artillery and its transport in a glider was a dangerous task as in a hard landing the heavy equipment was prone to move, trapping the pilots or the crew.

On this occasion, however, the landing was achieved safely and Ronald and his co-pilot went to rendezvous with the other glider pilots, who having delivered the gliders with their loads of men and equipment were now to act as an infantry unit helping to capture the bridge at Arnhem. After some welcoming from the local population his unit came under sniper fire.

The first few days involved moving slowly forward off Ginkel Heath towards Arnhem, an aim which became increasingly unlikely as the British troops encountered strong and unexpected opposition. Ronald described the effort of ‘digging in’, a process to be repeated many times over the next days, and the effect of the attacks that had to be fought off.  He gave a vivid sense of the reality of the situation for troops on the ground, their sleeping and eating arrangements and the constant rumours that the Second Army were just about to arrive to relieve their situation.

As the perimeter shrunk, Ronald’s unit moved further into the woods around Oosterbeek, suffering repeated attacks from the enemy and running short of supplies. Eventually the order came for the retreat over the Rhine in Operation Berlin, and Ronald was one of the nearly 4,000 lucky men to escape over the river Rhine, as opposed to the 6,500 airborne troops who were killed, missing or taken prisoners of war.

Nine Days is a straightforward but vivid description of one man’s experience in Operation Market Garden at Arnhem, a glider pilot who was highly trained as a pilot and soldier. It is in such personal memoirs that we gain a vivid sense of the battle and realise that many of the men who took part were not aware of the wider picture at all, concentrating on their particular area. It is a reminder of the gallantry and sacrifice of men involved in the Operation that has, perhaps aptly, gone down in history as “a bridge too far “.

Nine Days is available for purchase from The Great British Bookshop: https://www.thegreatbritishbookshop.co.uk/products/nine-days?_pos=4&_sid=61dae9f1d&_ss=r