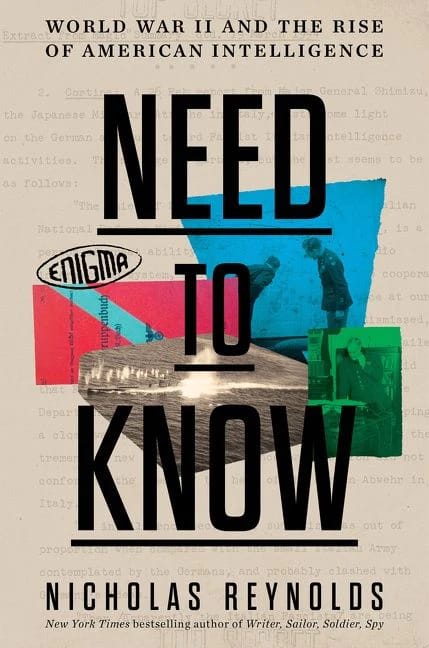 Need To Know: World War II and the Rise of American Intelligence

In recent years there has been a profusion of books dealing with the Cold War, American and Russian intelligence agencies and spies. Many books have also dealt with the exploits of the code breakers of Bletchley Park, but in this book, Nicholas Reynolds examines the genesis of the Central American Agency in the inter war years and particularly in The Second World War. He has used his academic research and practical expertise in the intelligence services to examine the complex set of personalities, rivalries and political manoeuvring which led to the development of the CIA and its global reach and influence.

The evidence for American Intelligence gathering is examined from the First Word War onwards, with the developments of the inter war years, in which it was seemingly haphazard and uncoordinated.  The role of the Japanese attack on Pearl Harbour in the speeding up the need for efficient intelligence is examined along with the success of its development in the Battle of Midway

Of particular interest is the way in which British politicians   including Winston Churchill, diplomats and military, including John Godfrey and   Ian Fleming, encouraged the development of centralised intelligence, including the appointment of a Coordinator of Information. Reynolds argues that without this British influence this first move in the rationalisation of intelligence would not have happened. The holder of this post, William Donavon, was a key figure in  the development of centralised intelligence lost no time in attempting to bring the many intelligence sources together, sometimes with mixed results. The narrative of the book includes his rivalry with J Edgar Hoover who attempted to bring it in the orbit of the FBI.

The author is not afraid to bring in a wide cast of characters in order to depict the wide-ranging aspects of the intelligence operations, from the code breakers dealing with Japanese codes. the development of radar intelligence and the links with Bletchley Park.  The work of the Office of Strategic Services, OSS, in gathering information and the Role of Allen Dulles in Geneva are considered.

Sometimes the vast canvas and competing personalities make for confusing reading as the strands of the growth of the CIA are woven into the narrative, but it is satisfying to persevere to appreciate the complexity of the intelligence history during the second World War. The book ends by examining the choices and decisions involved in the emergence of the CIA from the Second World War.

The wartime decisions were a mixture of action   and careful analysis planning and espionage but all played their part in the American intelligence community’s “Need to Know” then and in the post war, cold war, future.