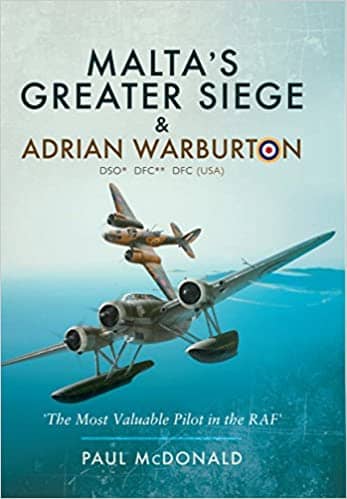 As the title implies, there are two themes to this book. There is much about the desperate part in the Second World War which the Maltese islands were called upon to play.

There is also the author’s quest to learn the story of Adrian Warburton, the much decorated Spitfire photo-reconnaissance pilot and his relationship with Christina Ratcliffe, a dancer stranded in Malta, who became an aircraft plotter.

Paul McDonald, a former RAF pilot, writes with considerable passion and commitment. There is much action and much poignancy too. I guess that the atmosphere of wartime Malta has been accurately created, aided by a superb collection of photographs. In more recent years I have visited the islands a number of times and vivid recollections were conjured for me.

An extensive acknowledgements section places the author in good company, including the Malta historian and author, Frederick Galea and shows McDonald’s skill in seeking out and enlisting the help of the right people.

Adrian Warburton’s gallantry was well recognised and the citations for his decorations are reproduced. Christina Ratcliffe also received recognition for her part in the defence of Malta and her BEM citation appears, including the words, “She was in charge of her watch and throughout the heavy air attacks on the island, never once failed to report to duty on time. She lives a considerable distance from the headquarters. When raids were in progress there was no transport, but she walked to work regardless of bombs and shrapnel.  During one raid her home was destroyed, but she carried on her work with her customary coolness and efficiency. Throughout, her work was of a high standard and her brave and cheerful demeanour were an inspiration to those who served under her.”

The book contains some passages out of place in an historical work. Thoughts and actions are attributed to people, where there is unlikely to be any first hand evidence of their veracity.