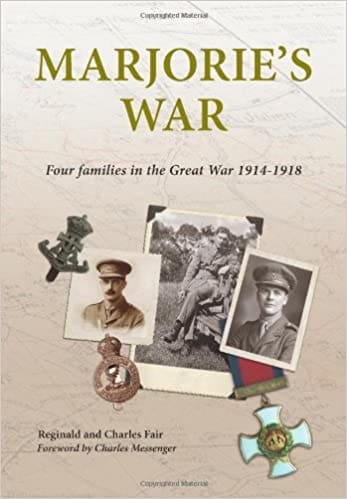 I have very much enjoyed this attractive book; from its cast of characters, through its construction and on to its presentation.

The letters, diaries and photographs that form this work must be virtually unique in that they have survived from both sides, not just the letters to home. Because of this, we see the impact of the war on those left at home, particularly the women. They form an almost unbroken narrative of the whole war, telling the story of nine young men through the conduit of the Marjorie in the title.

Marjorie Fair, nee Secretan was the mother and grandmother respectively of the authors and she is the nucleus of the story that connects four families through her two wartime romances and their family friends.

This book will be easily accessible to Great War ‘novices’ as well as the more informed reader because the authors have gone to a lot of trouble with explaining the chronology of the main events of the war, military hierarchy and abbreviations. In addition, there are passages linking the narrative on the wider progress of the war. It also includes family trees, but at the beginning gives only the dates of birth and helpfully, for me at least, the ages at the commencement of hostilities. This approach makes the reader want to read on even more by not giving the game away as to who survived and who didn’t.

The names of many other people crop up in the letters, especially from the front. Wherever possible, short biographies of whom these were and their fate is explained in detailed footnotes; as are events not necessarily concerning purely the Great War. The Jameson Raid is one such example.

Of course, these families were educated, middle class, articulate and very well-connected Edwardians and these are probably contributory factors as to why these particular documents have survived. Their writings give us an insight into a world that is totally unlike ours, clearly illustrating the events that contributed to its destruction through a conjoined narrative rather than a random collection of letters that happened to have survived in somebody’s loft. I am not sure that in 100 years we will have this type of narrative from Afghanistan with Skype and today’s e-world unless everybody saves their emails!

A book of this sort makes me want to experience that very different kind of existence, if only for a day or two! A world where everything was ‘topping’ and ‘ripping’ or ‘rotten’ and ‘frightful’. The periods of Toby’s leave related to us from Marjorie’s diary are very enlightening. It is interesting to read (given the social mores of the day) that a young lady of Marjorie’s class was prepared to take the sort of risks that don’t apply today! I commend to you the diary entry of 22nd May 1916.

I have to criticise one thing and how many times do we read this? As a draughtswoman, I am bound to mention this, but oh dear, the maps. I found the Loos one particularly bad as it depicts virtually none of the places mentioned in the text and does not even show the front lines.

Otherwise, I recommend this volume wholeheartedly as probably one of the best; if not the best book of its type we shall ever see, especially at the distance of virtually a century.

As I am now the chairman of Thames Valley WFA, I look forward to Charles adding this to his list of talks and I shall book him for my branch forthwith!