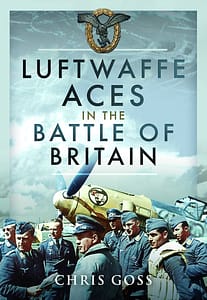 Luftwaffe Aces in the Battle of Britain

Over 200 Luftwaffe pilots who qualified for “experte” or ace status, requiring five or more victories, appear in this book. Most of them, of course, flew Messerschmitt Bf109s, but a significant number (covered in less detail) were in charge of Bf110s, a considerably less promising mount for personal glory.

Goss rightly points out the exaggerations in claims by fighter pilots of both the Luftwaffe and the RAF. He gives career summaries for his single seat-subjects and lists their credited victories in the Battle of Britain. There are many photographs, head and shoulders, but also pictures of personnel in airfield scenes.

Goss includes accounts of actions by both German and British aircrew; for example, we learn how Oberleutnant Anton Stangl became a PoW on 1 September 1940. In a combat with Spitfires he looked behind and saw that another Bf109 was about to collide with him. He “pushed my stick forwards and to the right and pressed myself into the cockpit. I felt the tremendous shock of the crash, my head was thrown forwards hitting the gunsight so that it bled very much …. I blacked out and came to after a second and saw my left wing had gone ……… Waiting and thinking for a moment, throwing off the canopy, bailing out (which was very easy in my strangely spinning plane) so that I was thrown out with great force ……. Now falling through the open air.”

Stengl opened his parachute and took about 30 minutes to reach the ground. Goss speculates that the pilot of the other aircraft was Oberfeldwebel Paul Gerber, who was killed.

In this highly-recommended volume Chris Goss naturally covers some well known names – Mölders, Galland and Wick for example. We also have the opportunity to learn of the careers of relatively unfamiliar names to a British audience. Men such as Feldwebel Hans Stechmann (41 confirmed and unconfirmed victories, later a test pilot, survived the war), Oberleutnant Karl-Heinz Leesman (killed in action July 1943) and Oberfeldwebel Artur Dau. The photograph is reproduced of Dau immediately after capture on 28 August 1940, with a police officer taking notes.