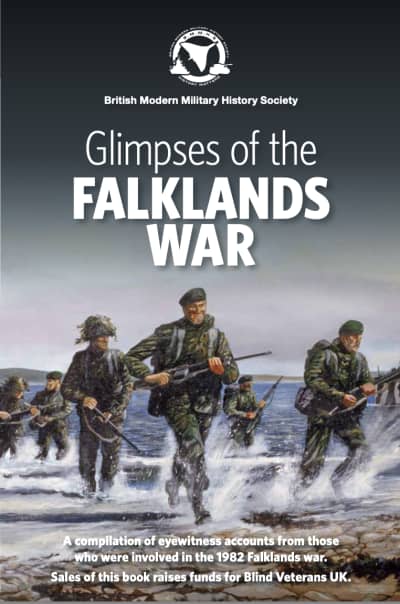 The overall aim of this comprehensive publication is to allow a substantial  body of experiences from the Falklands War to be written down before it was too late. There is a plethora of material published on the Falklands War but few, if any, have compassed the scale and magnitude of this group of personal experiences and anecdotes documented in this book.

This book is not about the pure history or the politics surrounding the Falklands War although undoubtedly this is touched on from time to time. It is more about the men, women and young people who lived through those events 40 years ago and, in some ways, how that has remained with them and clearly  touched the rest of their lives. The book contains – in 508 pages – literally hundreds of short glimpses of personal recollections of the War and arranges these roughly chronologically, following the key pivotal moments in the campaign. There are also some previously unpublished photographs.

Of particular interest to  F I Journal readers is that Andy and Jerry Cockeram (Editors) have integrated stories of young people’s accounts of their experiences or the oral legacy they have been left, of the War. They have taken many of the accounts printed in the FIJ published book (2021) on Young People’s Accounts of 1982 and interspersed those at appropriate places . There is an Argentine input to the book as well which helps take it above the mere mechanics of war into the personal and emotional. There is no exclusivity of suffering and loss in such events.

The Editor’s plea is that all those killed or injured in the War deserve to be remembered and their hope is that this book goes some way to document what they all experienced and went through.

Personally, I found the approach taken to be novel and refreshing. Even though there is a lot of pain in the accounts, there is also a sense of honour, duty purpose and fulfilment coming through. The inclusion of so many of the young people’s accounts is particularly gratifying to those of us involved in producing the Falklands Islands Journal every year. It is also a legacy and testament to the vision and objectives of the Jane and Alastair Cameron Memorial Trust in furthering the awareness of young people in the Falklands of their own history and how it moulds their future. Thoroughly recommended.