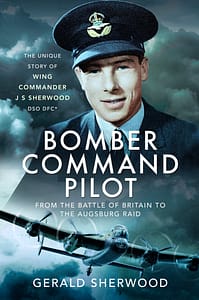 Squadron Leader John “Flap” Sherwood led the No 97 Squadron formation on the “Augsburg Raid” in April 1942, which involved flying to Bavaria in daylight. His Lancaster bombed the target, the MAN diesel engine works (supplying power to U-boats), despite being hit by flak and set on fire. The aircraft crashed immediately after. By a freak chance Sherwood survived. His crew did not.

He was initially reported as missing but it emerged that he was a PoW. He was recommended for the VC, a proposal endorsed by Air Chief Marshal Harris at the head of Bomber Command. In the event, the only VC for the raid went to Squadron Leader John Nettleton who led the force from No 44 Squadron. His Lancaster was the only one from 44 to return to England.

With five aircraft out of six from 44 gone, the mood at RAF Waddington, the squadron’s base, has been described in grim terms. Someone who was there was “Pip” Beck and in her book, A WAAF in Bomber Command, she wrote, “There was no way to express the horror that I, like everyone else on the station, felt. The whole camp seemed shocked and silent.”

John Sherwood received the DSO to add to the DFC and bar awarded for previous operations.

Now an affectionate and respectful biography has been written by Gerald, one of Sherwood’s sons. Augsburg is the focus but we also learn about the subject’s youth, marriage and family, his earlier wartime operations, his efforts as a prisoner to assist the “Wooden Horse” escape and “The Great Escape”, followed by participation in one of the awful marches west in the early months of 1945. Sherwood remained in the RAF as a Wing Commander. His later business and personal life is included. He died of cancer in 1973.

Gerald Sherwood is not, it seems, a professional writer and this shows. The book does not always flow, there are lapses in English and the author has a liking for tautology (“sufficiently enough”, “further prolonged” and “fell downwards” for example) and exclamation marks. There is much repetition. Most authors who feel the need to explain that port is left and starboard right, or that a squadron adjutant is an administrator, do so only once.Nor does the author always seem at home on service matters. RAF ranks apparently include “Air Marshall” and “Aircraftsman”. The weapon used by the Dam Busters was designed by “Barnes Wallace”.

I think Mr Sherwood has misunderstood the anonymous annotation of his father’s VC recommendation, which effectively downgraded the award. When someone wrote, “To be rec’d for DSO if later found to be alive”, this surely did not suggest, as Gerald Sherwood appears to think it did, that had his father been killed he would have received a posthumous VC.

The more likely message being conveyed was that it was appropriate for the DSO to be awarded but this could not proceed if Sherwood was dead. In 1942 the only possible posthumous awards were the VC, GC and a mention in despatches. An additional problem concerning the DSO was that it was not considered possible officially to admit a deceased person to an order. Policies have changed since then.

I am not the first to suggest that there was at least one further credible candidate for an Augsburg VC. The 97 Squadron Lancaster captained by Warrant Officer Tom Mycock, DFC was hit by flak and was ablaze on the run-up to the target but Mycock pressed on and bombed. The aircraft then crashed with no survivors.

I have mentioned matters which are irritations. To me the book has one major flaw. There is much reference to “Flap and his crew” but few names of individuals appear for Sherwood’s crews or any others, apart from pilots.

At the end of the book is a rather meaningless list of “RAF Bomber Command’s twelve most famous raids”, though there is no indication of how “fame” was measured. My proposition is that in any future edition this list is replaced with the names of all the men who took off on April 17 1942 to attempt to fly to southern Germany without the cover of darkness. They should all be in the Bomber Command pantheon.

Despite my complaints I gained information and satisfaction from reading this sometimes powerful account. Flap Sherwood has perhaps not had sufficient credit for his part in the war effort and there is plenty of room for more writing on the Augsburg raid.