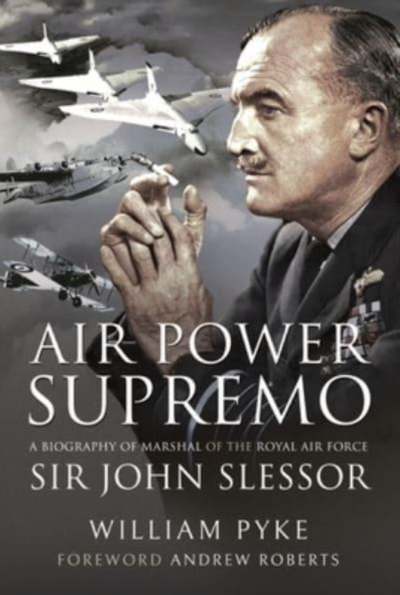 Sir John Slessor was a distinguished war time Commander who has not received the recognition of some of the more colourful characters in The Royal Air Force in the Second World War.

William Pyke has remedied this omission in his detailed and comprehensive biography of Slessor. He highlights the way in which Slessor, as well as being an important wartime commander, had an important impact on air strategy and warfare throughout his life.

Slessor joined the air force in World War One, as lameness as a result of Polio prevented him from joining the army. After the war in which he won the Military Cross and both the French and Belgium Croix de Guerre, he continued his career fulltime in the newly formed RAF, becoming a protégé and disciple of Hugh Trenchard. He understood that the RAF was part of the policing of empire and had ideas about its role in future conflict. As director of staff at Camberley, Slessor stressed the importance of air interdiction. The author describes how Slessor was at the centre of major events leading up to the outbreak of the Second World War, as Director of Plans at the Air Ministry and later as a key member of the Joint Planning Committee.

After what the author describes how Slessor was a key member of the British delegation at the top secret ABC talks in early 1942 in Washington prior to America entering the war, Slessor became Air Officer Commanding of Bomber Command 5 Group, dealing with the unsuitability of early bombers such as the Hampden and the Manchester and the inability of the bomber crews to hit targets accurately. Between March 1942 and Jan 1943 he was promoted to ACAS (Policy) at the Air Ministry liaising again with the USA on allied strategic air priorities. He then became C-in-C Coastal Command during a crucial period of the Battle of the Atlantic

Post Second World War Slessor continued to contribute to air strategy in the Cold War era as Chief of Air Staff.   Emmanuel Shinwell, Minister of Defence in Clement Atlee’s post war government, said “I regard him as one of the most brilliant men in the RAF. “

This biography is well researched, using a multiplicity of sources and including several appendices. It is an analysis in depth of Slessor’s pioneering and influential work on air warfare and strategy.