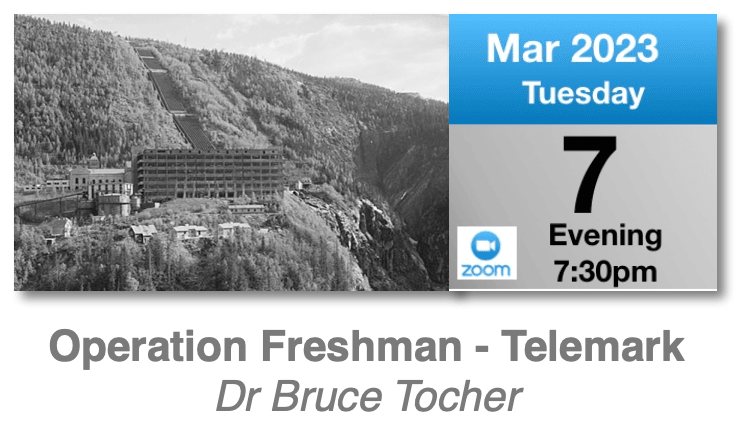 In July 1942, the British War Cabinet decided to try to destroy the heavy water production facilities at the Norsk Hydro facility near Vemork, Norway. The reason was the concern that the heavy water was being used as part of Nazi Germany’s program to develop a nuclear bomb.  After much discussion, it was decided to use specially trained Royal Engineers to carry out the task. They were to be flown to a landing site on the Hardanger Plateau, near the Vemork facility, using two Horsa gliders, each towed by a Halifax bomber.
The Royal Engineers who took part were all volunteers.  Twenty men came from the 9th (Airborne) Field Company and ten from the 261 (Airborne) Field Park Company.
On the evening of November 19th, 1942, despite some misgivings regarding the weather over the objective, two Halifax bombers, each towing a Horsa Glider took off from RAF  Skitten, near Wick in NE Scotland. On board each glider were 15 Royal Engineers, and two pilots. Their top-secret mission was code-named Operation Freshman.
Bruce will describe the events leading up to the decision to carry out the raid, personnel selection, the training involved, the raid itself, and the tragic outcome for the men who took part.

The successful attack on the Heavy Water facility at Vemork in Norway in February 1943 is rightly regarded as one of the most daring special forces raids of WWII. Over the years many books have been written about this raid, Operation Gunnerside, and it has been portrayed in films (The Heroes of Telemark, starring Kirk Douglas), television series (The Heavy Water War) and numerous documentaries. However, what is less well known is that there was an earlier attempt to destroy this target. This raid, Operation Freshman, which was launched on the 19th November 1942, failed tragically with 41 of the 48 soldiers and airmen involved losing their lives.

Several books have been published in which Operation Freshman is described, e.g., by Richard Wiggan (1986) and Jostein Berglyd (2005). The latter publication, in particular,  provided important new information based on interviews with some of the German soldiers who witnessed the events at Slettebø. In 2011, Ion Drew et al. published Silent Heroes which, in addition to the details of the raid, also provided an insight into the personal lives of the individual servicemen and their families. At the time of publication, however, details of only some of the men were available. Efforts are now being made to address this gap and to publish a new book on Operation Freshman which includes information on all of the men who took part in the mission.

With this in mind, The Operation Freshman Project is trying to trace any surviving relatives or people who have stories or anecdotes concerning the servicemen who participated in the raid, or who were involved in the planning, training and support roles, and who may have photographs, letters or other documentary information relating to the servicemen. The idea is to tell the story of these incredibly courageous young men through their lives, and lives of their families, rather than more conventional histories which focus primarily on the events themselves.  Since the start of 2020, the project has managed to establish contact with relatives of 37 of the 48 soldiers and aircrew who took part in Operation Freshman. This effort is ongoing.

A series of events to mark the 80th Anniversary of the raid has also been organized and the first of these, a Memorial visit by families of the soldiers and aircrew to the Freshman-related sites in Norway, took place in September. In total, 67 family members, representing 23 families attended.

In November, 2022, two public lectures were given, marking the 80th Anniversary. The first was held at the Royal Engineers Museum, Gillingham on the 17th of November), and the second, at the Army Flying Museum, near Andover, on the 22nd November.  This BMMHS Zoom online lecture is the third talk to mark  the anniversary.

About the speaker - Dr Bruce Tocher

Dr. Bruce A. Tocher has a PhD in Geology and was a University Lecturer in the UK for 10 years before moving to Norway to join their largest oil & gas company, Statoil. He spent 20 years there working in their Research & Development Division, before taking early retirement in 2016. He then spent two years as an International Trade & Investment Senior Executive with Scottish Enterprise before deciding to focus full time on military history, in particular Operation Freshman. Bruce has spent three years researching this topic with the aim of publishing a new book on the raid, hopefully in 2023.