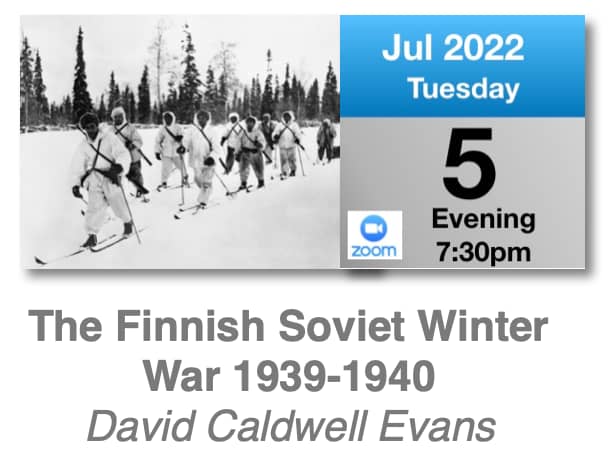 Marshal Mannerheim and his pivotal role in Finland’s politics and defence.

Opening moves of the war and the reasons for the Red Army’s failure.

‘Sisu’ and the ‘White Death’ – the myth and reality of Finland’s successful defence.

The Red Army’s resurgence and reasons for ultimate success.

Consequences of the Winter War for Finland, the USSR, Nazi Germany and the Allies.

About the speaker - David Caldwell-Evans

Having grown up surrounded by wartime relics on Britain’s Channel Coast, David Caldwell-Evans has had a lifelong interest in military history. Over the last twenty years he has been able to put this passion to good use while making television documentaries for the likes of Channel 4, Channel 5, UKTV, National Geographic and the History Channel.

His past work includes the five-part series ‘Project Nazi: Blueprints of Evil’, films about the Battles of Stalingrad, Berlin, Saipan and Peleliu, and an examination of Britain’s Moslem soldiers in both world wars for Al-Jazeera called ‘For Allah, King and Country’. More recently he was the Story Producer on ‘World War Two Battles in Colour’ – a forthcoming Smithsonian Channel series.

Besides land warfare, David’s interests include warship design and naval operations and when creating the highly successful series ‘Abandoned Engineering’ this enabled him to include some extraordinary surviving wrecks and coastal artillery sites around the world which had never previously been filmed for television.

Over the years David has been privileged to interview many veterans of the Second World War and more recent conflicts and besides producing and directing documentaries he has also appeared on screen telling the extraordinary stories of the missing art treasure ‘The Amber Room’ and the ‘Hippopotamus’ – the First World War Italian 149mm gun still perched on a knife-edged ridge 6000 feet up in the Dolomites.