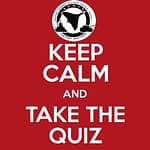 Oops – Looks like you need to attend more BMMHS talks !

#1. What was the codename for the Argentine invasion of the Falkland Islands in 1982 ?

The Invasion of the Falkland Islands : Invasión de las Islas Malvinas), code-named Operation Rosario, was a military operation launched by Argentine forces on 2 April 1982, to capture the Falkland Islands, and served as a catalyst for the subsequent Falklands War. The Argentines mounted amphibious landings and the invasion ended with the surrender of Falkland Government House.

The operation had been called Azul (Blue) during the planning stage, but it was finally renamed Rosario(Rosary).

#2. Operation Neptune was the part of which major action in WW2 ?

The Normandy landings were the landing operations and associated airborne operations on Tuesday, 6 June 1944 of the Allied invasion of Normandy in Operation Overlord during World War II. Codenamed Operation Neptune and often referred to as D-Day, it was the largest seaborne invasion in history. The operation began the liberation of German-occupied France (and later western Europe) and laid the foundations of the Allied victory on the Western Front.

#3. The rescue of the hostages from the Iranian embassy in 1980 was called ?

The Iranian Embassy siege took place from 30 April to 5 May 1980, after a group of six armed men stormed the Iranian embassy on Prince’s Gate in South Kensington, London. The gunmen, Iranian Arabs campaigning for sovereignty of Khuzestan Province, took 26 people hostage, including embassy staff, several visitors, and a police officer who had been guarding the embassy. They demanded the release of prisoners in Khuzestan and their own safe passage out of the United Kingdom. The British government quickly decided that safe passage would not be granted and a siege ensued. Subsequently, police negotiators secured the release of five hostages in exchange for minor concessions, such as the broadcasting of the hostage-takers’ demands on British television.

By the sixth day of the siege the gunmen were increasingly frustrated at the lack of progress in meeting their demands. That evening, they killed a hostage and threw his body out of the embassy. The Special Air Service (SAS), a special forces regiment of the British Army, initiated “Operation Nimrod” to rescue the remaining hostages, abseiling from the roof and forcing entry through the windows. During the 17-minute raid they rescued all but one of the remaining hostages and killed five of the six hostage-takers.

Operation Citadel – The Battle of Kursk was a Second World War engagement between German and Soviet forces on the Eastern Front near Kursk(450 kilometres or 280 miles south-west of Moscow) in the Soviet Union, during July and August 1943. The battle began with the launch of the German offensive Operation Citadel (German: Unternehmen Zitadelle), on 5 July, which had the objective of pinching off the Kursk salient with attacks on the base of the salient from north and south simultaneously.

#5. Operation Carthage was the name of what action in WW2 ?

Operation Carthage, on 21 March 1945, was a British air raid on Copenhagen, Denmark during the Second World War  The target of the raid was the Shellhus, used as Gestapo headquarters in the city centre. It was used for the storage of dossiers and the torture of Danish citizens during interrogations. The Danish Resistance had long asked the British to conduct a raid against the site. The building was destroyed, 18 prisoners were freed and Nazi anti-resistance activities were disrupted.

#6. Operation Anthropoid was the operation in 1942 to kill which German commander ?

Operation Anthropoid was the code name for the assassination during World War II of Schutzstaffel (SS)-Obergruppenführer and General der Polizei Reinhard Heydrich, head of the Reichssicherheitshauptamt (Reich Main Security Office, RSHA), the combined security services of Nazi Germany, and acting Reichsprotektor of the Protectorate of Bohemia and Moravia

#7. In the Vietnam War, what was Operation Rolling Thunder ?

Operation Rolling Thunder was the title of a gradual and sustained aerial bombardment campaign conducted by the United States (U.S.) 2nd Air Division (later Seventh Air Force), U.S. Navy, and Republic of Vietnam Air Force (RVNAF) against the Democratic Republic of Vietnam (North Vietnam) from 2 March 1965 until 2 November 1968, during the Vietnam War.

Operation Barbarossa (German: Unternehmen Barbarossa) was the code name for the Axis invasion of the Soviet Union, which started on Sunday, 22 June 1941, during World War II. The operation put into action Nazi Germany’s ideological goal of conquering the western Soviet Union so as to repopulate it with Germans.

Do you want to set the questions for BMMHS Quiz ?