BMMHS Evening Meeting: Who were The Few ?

Who were The Few ? 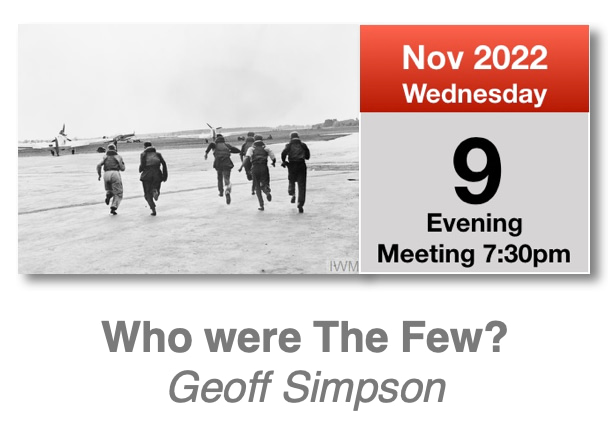 Who were The Few ?

Geoff will discuss the wartime moves to recognise the Allied airmen who flew in the Battle of Britain, the announcement, in 1945, of the “immediate” award of the 1939-1945 Star with Battle of Britain Clasp and the subsequent decade and a half of adjustments to the definition of who qualified. He will outline the research into who qualified – a new name was officially added to the list as recently as 2020 by the Air Historical Branch (RAF) – as well as the current expansion of the entries in the standard work of reference, Men of the Battle of Britain, and the Battle of Britain Memorial Trust’s aircrew database, to include much more information on the social backgrounds and civilian careers of the Few. The talk will be enlivened with anecdotes about the men who flew against the Luftwaffe in the summer and autumn of 1940.

About the speaker - Geoff Simpson

Geoff has studied the Battle of Britain since the 1980s, including interviewing, talking to and corresponding with several hundred of The Few.

Geoff was a trustee of the Battle of Britain Memorial Trust (custodian of the National Memorial to the Few) from 2000 to 2015 and the Trust’s historical consultant until 2017.