From the Sea, Freedom: The Falklands Conflict 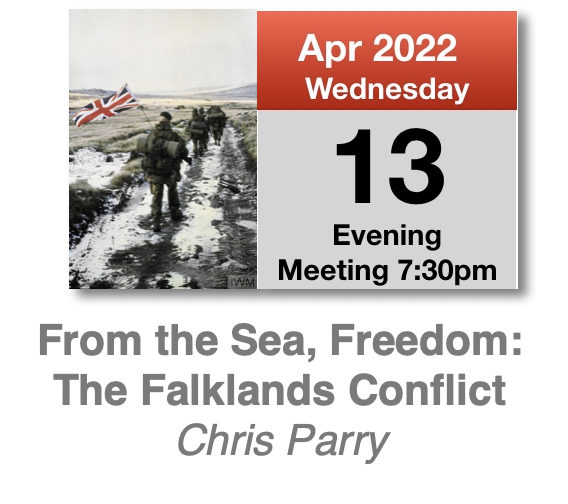 Rear Admiral Dr Chris Parry will combine both historical and personal insights to describe the extraordinarily complex and difficult operation of this conflict. Final success on land in the Falklands War would not have been possible without the ability to deploy and sustain forces over a distance of 8000 miles or without the maritime and air capability to deter, disrupt and destroy Argentinian forces.

Buy print of Humphrey – all proceeds will go to SoFFAAM to help support the Fleet Air Arm Museum. email info@bmmhs.org

About the speaker - Chris Parry

After reading Modern History at Jesus College Oxford, Chris Parry spent 36 enjoyable, rewarding years in the Royal Navy as an aviator and warfare officer. He commanded the destroyer HMS GLOUCESTER, the Amphibious Assault Ship HMS FEARLESS, the UK’s Amphibious Task Group and the Maritime Warfare Centre. He also held five senior Joint and UK Ministry of Defence appointments, with responsibility for the strategic development, policy, effectiveness and operational deployment of all three armed forces out to 2030.

As well as sailing every sea, he experienced regular operational tours and combat operations in Northern Ireland, the Gulf and the Falklands, where he rescued 16 SAS troopers from a glacier during a hurricane in South Georgia and disabled the Argentinian submarine SANTA FE. He was awarded the Guild of Air Pilots and Air Navigators Helicopter Rescue Award in 1983 and his Falklands War diary was published as the best- selling ‘Down South’ in 2012.

Nowadays, he runs his own strategic forecasting and trouble-shooting company, advising governments, leading commercial companies and banks about geo-political and strategic issues, future trends and systemic risk. The founding Chair of the UK’s Marine Management Organization, he is an internationally recognized authority on maritime issues, as well as in countering terrorism, criminality and unconventional conflict.

With a doctorate in organisational psychology, Chris is a visiting Fellow at Churchill College Cambridge and presents on strategic issues, geopolitics and risk at several universities in the UK (Oxford, Reading, Swansea), the US (Ivy League institutions and the US Naval War College) and elsewhere. He also teaches strategic leadership, risk management and organisational psychology within a number of corporates and at the UK Defence Academy and the Global Leadership Academy. He appears as a regular broadcaster and commentator in international and UK media and is an active author, most recently with the prescient Super Highway: Sea Power in the 21st Century’.

Down South - A Falklands War Diary

28-year-old Chris Parry was an officer on a Wessex III helicopter on HMS Antrim during the Falklands War. Built in the 1960s, Antrim was primarily designed to deal with the threat from Soviet missiles. But in the early months of 1982 she found herself heading south to spearhead the operation to recover South Georgia from the Argentinians.
Within days Parry and his crew were trying to land SAS members on the formidable Fortuna Glacier in a near white-out. Buffeted by storm-force winds and driving snowstorms, they managed to disembark the men – only to be forced to return the following day when it was clear they couldn’t survive the extremely hostile conditions. A few days later a sombre Parry was releasing the depth charges which disabled an Argentinian sub lurking in the freezing waters of South Georgia. He went on to take part in the landings at San Carlos and experience the intensity of Bomb Alley.
Chris Parry’s diary, written every evening during the conflict immediately after the events described, has been lost for thirty years. It is published now for the first time on the anniversary of the war, a vivid and eloquent reminder of the dangers and hardships endured by our forces during the conflict. 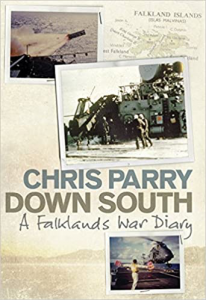