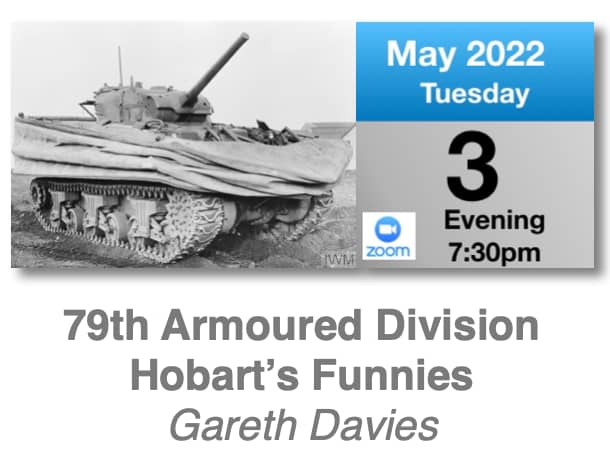 This Zoom Talk is scheduled to start at 7:30pm

These unusual vehicles played an important role in the D-Day landings, the Battle of Normandy and the campaign in north-west Europe. The failed Allied raid at Dieppe in August 1942 exposed how difficult it was to land vehicles and men during an amphibious invasion and to break through German coastal defences – specialised armour was needed to get across soft sand and shingle and through beach obstacles.
The Allies made very few efforts to develop this armoured equipment until preparations began for D-Day. In early 1943, the 79th Armoured Division under the command of Major-General Sir Percy Hobart was given responsibility for developing equipment and tactics to perform specialised tasks in support of ground troops on and after D-Day. Not only did Hobart improve on existing designs, he created entirely new technologies. The armoured vehicles of the 79th became widely known as ‘Hobart’s Funnies’. Source IWM

About the Speaker - Gareth Davies

BMMHS Is delighted to welcome back Gareth following his excellent talk on The Battle of Kursk in January 2020.

Gareth has been a keen student of twentieth century warfare for many years. He served in the Royal Tank Regiment for over 25 years and his military career included tours teaching at Sandhurst, the Land Warfare School, and the Joint Services Command and Staff College, as well as two tours in the Ministry of Defence. He has an MA in Defence Studies from Kings College London.

Gareth now works as a Warfare Analyst, looking at current military challenges as well as helping people learn from the past. He regularly leads group tours for schools and military units as well as highly bespoke tours for individuals and families. His interests include command, learning, and technology; the Great War in France & Flanders, Italy, and Palestine; Second World War combined arms actions of 1944 and 1945; and tanks – because a day without a tank is a day wasted. His first book, on tanks in 1917, will be published by Helion in 2021.