Stanley Deacon (known to all as Deac) was born in March 1916 and grew up in Leyton, in north east London. He excelled at mathematics at school, leaving aged 16 to work as a shipping clerk for Mitsubishi in the commercial docks area of London. He was a keen scout, cross country runner and played Rugby.

At the outbreak of war in 1939, Stanley volunteered for the Royal Air Force. Aged 23, he was older than many of the other volunteers. Initial training as an aircraft wireless operator was conducted in Blackpool and at RAF Yatesbury, followed by Wick, Caithness, listening for faint distress calls from aircraft over the North Sea. During 1941 he trained as an advanced Navigator and Wireless Operator at RAF Staverton. Graduating from there as an Air Observer navigator, he was then posted in January 1942 to No 2 OTU (Operational Training Unit) at RAF Catfoss.  Flights were initially in Ansons and Oxfords, then moving on to Bristol Blenheims and the new Beaufighter.

In mid-1942, Deac and his Australian Pilot, Sgt Gordon Nettleship, were sent on a troop ship via North America to Takoradi in West Africa, formerly the Gold Coast Their Beaufighter aircraft had been shipped in crates and assembled in Takoradi before they flew the ‘Takoradi Run’ north over Nigeria, the Sahara Desert, Sudan and Egypt.

Upon arrival in Egypt, they were assigned to 252 Squadron, based at Edu, west of Alexandria. 252 Squadron specialsed in anti-shipping attacks against the Italian and German Navies and forces in North Africa and the region around Malta. The main task was to disrupt the enemy’s supply chain and soften up the armies before the Allied push at El Alamein. From 252 Squadron, Gordon and Deac were transferred to 227 and 272 squadrons based in the recently relieved Malta. Ultra-Low-Level Anti-Shipping strikes continued including around Tunis, Algeria, Libya and Sicily until March 1943 when they were posted back to England.

The pressure on North Africa had subsided and the focus moved to Europe. The return journey started in Suez and returned to England via Durban and Rio de Janeiro to avoid the North Atlantic U-Boat attacks. Flying recommenced in July, initially in Beaufighters of Coastal Command either conducting air-sea rescue searches across the North Sea or training other crews.

In January 1944, Deac joined No.9 Operational Training Unit at Crosby on Eden, converting to the Mosquito bomber aircraft. In April 1944 he joined 571 Squadron, part of 8 Group Bomber Command. Part of the Pathfinder Force based at RAF Oakington.   During this time Deac was involved in the development and air testing of the new Navigational aids being introduced, including Gee, H2S and Oboe. Mosquito bombing raids were conducted over German cities including the Ruhr, Berlin, Hanover, Bremen, and Frankfurt. In October 1944 Deac had completed 100 Operational Missions and was awarded his first DFC. This was rapidly followed by a second, after he navigated Mosquitos to lay mines at ultra-low level in the Kiel Canal.

In January 1945 Deac trained with Transport Command based at RAF Bramcote. On completion of this conversion to larger aircraft, Deac was assigned as an RAF Officer to the British Overseas Airways Corporation (BOAC). Initially flying DC-3s, he soon moved on to the Sunderland flying boat, and later the civilian Hythe variant. From Poole Harbour, flying to Bordeaux or Marseilles, then onto Augusta in Sicily, Alexandra, Baghdad, then to Bahrein, Karachi, Rangoon, Singapore, and on some trips, on to Surabaya, Darwin and Sydney.

Deac retired from flying and BOAC later in 1946.

Photos from Deac's personal Album & excepts from his Log Book

In February 1946, Deac’s flew with Captain R. C. Parker in Sunderland G-AGJM,  with BOAC Chairman Lord Knollys aboard. They made a 35,313 mile route survey from Poole to Australia, New Zealand, Hong Kong, Shanghai and Tokyo in 206 flying hours. It was the first British civil flying boat to visit China and Japan.

BOAC ended its service in February, 1949,  G-AGJM went to Aquila Airways. In January 1952 G-AGJM was scrapped at Hythe. 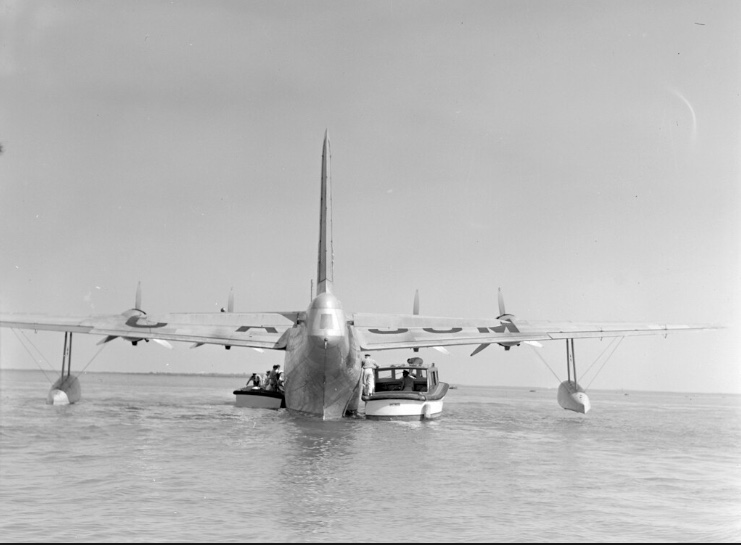